An Eagle’s Ascent: Meet Jace Scholes His love of nature paved way for a partnership with the Boy Scouts 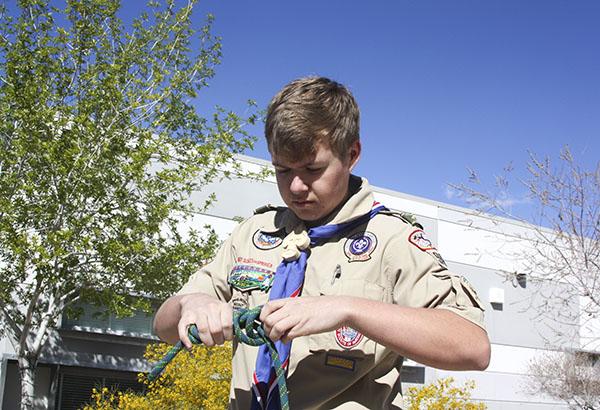 Junior Jace Scholes (left) poses proudly with his fellow scout as his sash reflects the many years of determination required to fill it so completely. “I’ve been gathering merit badges since I was five years old, and they’re really starting to build up. It’s great to be able to really see my progress,” Scholes said.
Photo Credit: Jace Scholes

Personal recreation and passion for a craft have always been the defining qualities of a pioneer; Henry Ford’s automotive ambition, Leonardo Da Vinci’s boundary-breaking medical fascination and the progress of the world itself each stand as evidence of this philosophy. Junior Jace Scholes exemplifies them through his steadfast connection with the outdoors and the bustling knowledge it holds in its depths.

“As a little kid, I was always outside and my parents thought the Scouts were a good fit for me. As I got older, I realized that the skills I was learning would help me for the rest of my life and that the friendships I made would last a lifetime,” Scholes said.

His affinity for what the Scouts had to offer was apparent to him from an early age. He often ventured outside of his house in search of activities that engaged his interest. These were as varied as the stars in the sky, but they all contributed to a singular interest that would help form the desire to become part of something he would soon adore.

“I started at the age of five as a Cub Scout and worked my way up as I got older. I started off small, and grew more and more as the years passed, just like with any big activity that people take part in. It grew up with me, and I grew up with it,” Scholes said.

Nature was always what compelled him to learn, thrive and apply that success to each of his life’s factions: craftsmanship, the arts and even the upholding of communication skills among his cohorts. The Boy Scouts were, indeed, a ‘good fit.’

[vision_pullquote style=”1″ align=””] My favorite thing about scouting is that I am able to give back to my troop and teach younger scouts and help them become leaders in their community. [/vision_pullquote]

“When I was smaller, I would venture outside and get into things that I enjoyed getting into. I would climb as many trees as I could, collect interesting leaves and rocks and even observe any wildlife I came across. Scouts matched this very well,” Scholes said.

The Scouts did not only provide vast knowledge of practical crafts and outdoorsmanship, but offered the moral qualities required to excel among peers, as well. These ideals are meant to be instilled in each scout, as well as the people with whom they share a community.

“Not only do you learn about the outdoors, but you learn how to be a leader and how your actions can change the community. We try to make positive changes and have a good influence where it’s needed, and it’s definitely needed quite a lot,” Scholes said.

The very same theme is carried on by Scholes and his fellow scouts to ensure the steady incline of positivity yielded by the program outside of its small reach, which he holds in high regard.

“My favorite thing about scouting is that I am able to give back to my troop and teach younger scouts and help them become leaders in their community. Like I said, we focus on positive influence. A lot of kids are young and not sure what to do with themselves in this way, so we help them along their path,” he said.

Accompanying the positive impact apparent in the evidence given by Scholes is a great variety of memories that will colorfully paint the canvas of a scout’s youthful mind. They leave behind hallmarks of future nostalgia that a scout can look back on and cling to as beloved experiences.

“My most fond memory in Scouts was my ten-day backpacking trip at Philmont Scout Ranch. My fellow scouts and I hiked 68 miles in ten days, carrying everything we needed on our backs. We stopped at different camps every day and participated in a different activity every time. We did everything from shooting 50-caliber black powder rifles to climbing and rappelling,” Scholes said.

I find nature fascinating, and I really like being able to do things that are going to be useful to me in the long term.

The well-known, yet almost archaic practice of giving merit badges is still very much active and drives Scholes to improve and solidify his skills as they are presented to him, or as they are promoted by the Scouts. These badges span a vast range of skills, or merits, as the title directly suggests. They may include practical knowledge, scout knowledge and more, as the program proudly boasts.

“The most difficult merit badge I earned was welding. I was taught by two certified welding inspectors and I went through six hours of class work and was not able to get the badge until I could weld to a professional standard. It was difficult, but it was worth it because it’s something I’m likely to make use of later on in life,” Scholes said.

All of this, however, is met with a bare following; fewer and fewer people partake in the practice, and the decline of the Scouts’ numbers hurts their movement. Following such shortcomings are disappointment on the part of the Scouts, and the deceleration of the program’s wholesome drive for excellence.

“My least favorite part of Scouts is that not enough people are getting involved in it and are missing out on learning skills that will help them throughout their life. This is such an amazing opportunity for so many people, yet nobody takes advantage of it. I’ve definitely noticed the lack of members around, and the others (scouts) have as well. It’s starting to really impact the group morale, but it sort of always has,” Scholes said.

“It’s the best thing I could have done to follow up on something I love so much. I find nature fascinating, and I really like being able to do things that are going to be useful to me in the long term. The program is simply amazing, and I can’t believe more people don’t consider it and really go through with it, because it’s shaped my life in a way that nothing else has to this day,” Scholes said.