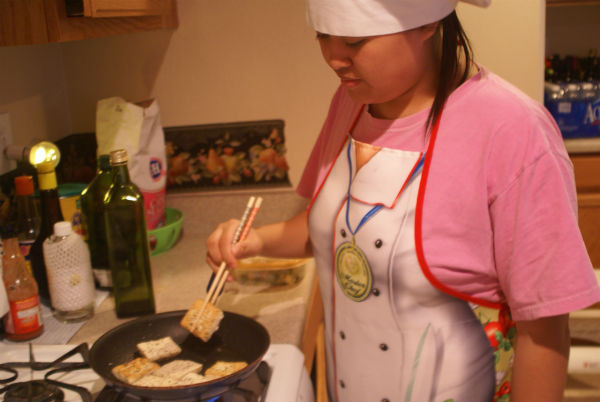 Junior Cindy Tran cuts onions to put into her dinner. Tran prepared a meal for her family that was Asian influenced. "I cook for my friends and family when I have time, they really criticize my food, and tell me if it is good or not," said Tran.
Photo Credit: Helen Abraha

Junior Cindy Tran has a special talent for making unique dishes. She cooks for her friends and family when she has time to spare, and specializes in Asian cuisines. Tran has improved her cooking skills dramatically since she first began cooking, and is even considering pursuing it as a future career.

Southwest Shadow: When did you first begin cooking?

Cindy Tran: I started cooking at a young age, just the basic things like rice and eggs. It was not until about freshman year that I began cooking more complex dishes.

Shadow: Who taught you to cook?

CT: I guess my mom influenced me to cook, not for the reason being that I was inspired by her, it’s because she rarely has the time to cook for my brother and me. A girl’s gotta eat! No one really taught me how to cook, it really was self taught. I experimented and went with the flow. I learned most of the cooking techniques from what I saw on cooking shows. When I’m not doing homework, I usually am watching the Food Network Channel. If I ever saw something I liked, I would try to recreate my own version of it. Also, I learned how to cook from YouTube channels. All of my channel subscriptions are cooking channels. I also get ideas from cooking magazines, pretty much any resource I can get my hands on.

Shadow: Do you plan on pursuing a career in the field of culinary?

CT: Currently, I am enrolled in the nursing program. I tried switching to culinary, but by the time I realized how much I loved to cook, it was too late. If nursing doesn’t cut it for me, I probably will pursue a career in the culinary field.

Shadow: Do you cook for family/friends on special occasions?

CT: Throughout the week, I’ll probably cook five of the seven days for my family. Whenever I have extra food, I bring it to school and share it with my friends. According to them, they love my food and always wants me to bring some in. Whenever I invite them over to my house, I cook one of my specialties.

Shadow: What’s some of your favorite things to cook?

CT: The food I usually cook are Asian-influenced dishes ranging from Korean, Japanese, and Chinese. I have developed a Kimbap recipe, which is a Korean version of sushi made without raw fish. Japanese dishes I have created are recipes for yakisoba (fried noodles), tonkatsu (fried pork cutlet), and various bentos (lunch boxes with a variety of side dishes). The number one Chinese-influenced dish I have created are steamed pork buns (almost like an Asian taco).

Shadow: Is there anything that influences you to cook?

CT: I guess the need to eat influences me to cook. I do it because I love to eat, especially food that I can’t find at restaurants.

Shadow: Are you known for making any special dishes?

CT: I really love making bento boxes. Bento boxes are popular in Japanese culture. It is a lunch box that consists of many different side dishes. Usually the food is decorated and transformed into animal shapes or popular characters. Although these require a lot of work and patience to make, I enjoy taking that time and decorating them. I usually make these bento boxes for my friends. Seeing their face and how satisfied they feel after eating the food I made makes me feel really happy and appreciated.

Shadow: What types of cooking skills have you developed since you began cooking?

CT: From teaching myself how to cook, I have learned many skills, but the one technique that really challenged me was how to sauté and flip food without utensils. At first when I attempted to sauté, all the food I was cooking in the pan ended up all over the stove. I learned the trick behind this skill, it’s all in the wrist. It took me a long time until I finally was able to sauté all kinds of food. My favorite thing to flip has to be pancakes.

Shadow: Who in the food world do you admire the most?

CT: In the food world, I would say I admire Sandra Lee the most admirable. I love watching her cooking shows because she teaches easy ways to make delicious, flavorful, and easy food with 70 percent store-bought ingredients combined with 30 percent fresh ingredients (Semi-Homemade with Sandra Lee). She also developed a new show called Sandra’s Money Saving Meals which allowed me to learn how to cook on a budget by spending the least amount of money to make sizable, and tasty dishes.

Shadow: Do you have a favorite cooking utensil? If so, what is it?

CT: My favorite cooking utensil has to be chopsticks. Chopsticks for some people may be a bit challenging to use, but for me I have used them all my life so it is comfortable for me to cook with these. I use them for multiple tasks like flipping, stirring, and tossing. Two sticks can do a lot.