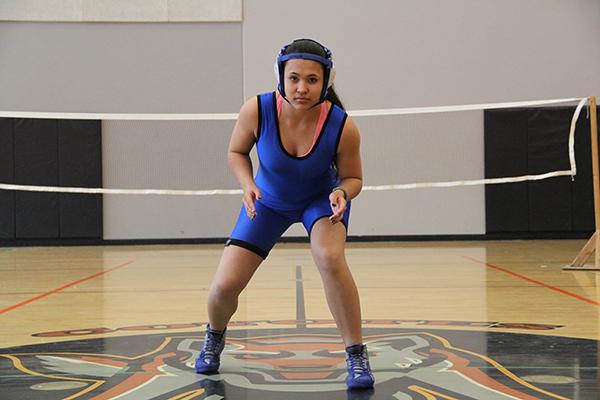 Caroline Sauder chose to leave the management team for the Sierra Vista Wrestling Team to be an active wrestler. Sauder has won several titles since her transition to active member of the Vista team.
Photo Credit: Michelle Rose Manuel

Not only is junior Caroline Sauder in the Respiratory Therapy program, but she also wrestles for Sierra Vista High School on a wrestling team. Despite the comments Sauder receives for being a female wrestler, wrestling is a passion she holds dear in her heart. The sport has become an important part of her through the years, and she hopes to acquire a scholarship for her wrestling passion.

Southwest Shadow: Where do you wrestle?

Shadow: How long have you been wrestling?

CS: This is my second year.

Shadow: What wrestling meets have you participated in?

CS:  I attend a different meet every weekend starting from November to February.

Shadow: What accomplishments and goals do you have for wrestling?

CS: I want to get better and just have a great time while wrestling.

Shadow: Do you plan to wrestle after high school and why?

CS: Yes, because it is a part of me that will always be there.

Shadow: What is it like wrestling on a team?

CS: It is great because my friends are there to support me and help me improve.

Shadow: How do you keep up with academics and friends while also wrestling?

CS: After practice I go home and start directly on homework. If I have time after a tournament, then I hang out with friends, but if not then I wait until the season is over because I have a little more free time.

Shadow: How did you get into wrestling?

CS: I started as a manager, but it looked interesting so I jumped in and then stuck with the sport.

Shadow: What was your longest winning streak and how did you get it?

CS: I don’t really have a winning streak because I have more than one match in a tournament.

Shadow: How do you feel about the judgement on female wrestlers?

CS: My team doesn’t judge, but other teams might. They underestimate me but I have proven them wrong. It doesn’t bother me too much, because it’s not my problem if they don’t like female wrestlers . . . I’m going to wrestle regardless of what they think or say.