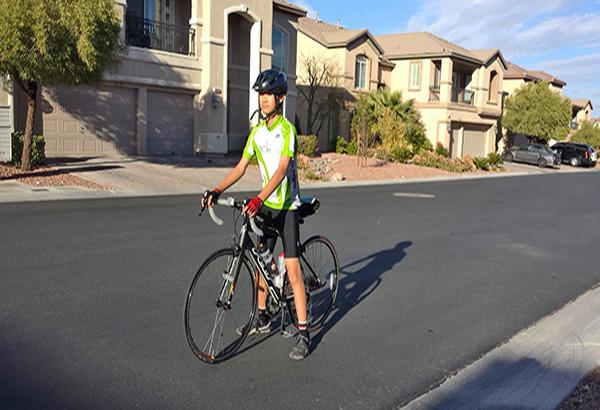 Freshman Ryan Wong started bicycling at the age of 10, and continues to carry on the sport. Wong balances school work and cycling successfully, and always manages to keep both attributions top-notch. The lack of cycling coaches in Las Vegas does not hold Wong back, as he still aspires to become a professional.

Southwest Shadow: How long have you been bicycling?

Ryan Wong: I’ve been cycling since I was 10 when I rode my bike to 7-Eleven and Walmart by myself.

Shadow: What are some accomplishments that you have made bicycling?

RW: From cycling, I completed 10 mile, 25 mile, and 40 mile rides and have met many people on the way to these accomplishments. I’ve also taught a few people to shift their gears on their bikes and taught them better ways to ride.

Shadow: Do you have any goals in terms of bicycling?

Shadow: How do you balance bicycling and school, and what other hobbies/activities are you involved in?

RW: I do really well in school so I am able to make a lot of free space for cycling. On the weekends I ride at least 20 miles in the morning and do my homework in the afternoon. When the weather isn’t that great outside for cycling or it’s too dark, I usually play video games on my computer.

Shadow: Do you plan on pursuing an athletic career as a professional bicyclist?

RW: I do plan on becoming a professional cyclist, but I will most likely have to go out of state to find a team or coach since there aren’t many teams in Las Vegas.

Shadow: Have you participated in an bicycling events and which ones?

RW: I have not participated in any large bicycling events yet, but I have ridden with large groups of people that I’ve met online.

Shadow: What is your favorite bicycle and why?

Shadow: What biking routes have you taken?

RW: There aren’t many biking routes in Las Vegas, but I have ridden the only one I consider that is popular which is Red Rock. I’ve ridden up to Red Rock from my house which was a 40 miles ride round trip.

Shadow: Do you have a favorite professional bicyclist and why is he/she your favorite?

RW: I do not have a favorite professional bicyclist, but I do have a favorite team which is the Belkin Pro cycling team. It is my favorite because they ride the Bianchi Oltre Xr.2 and are sponsored by Bianchi.

Shadow: What influences your bicycling?

RW: What influences my cycling is the videos I see online that are of tours and different bikes which inspire me to want to ride ASAP and my health. If I’m sick, I can’t ride really well and becomes more of a chore than a hobby.