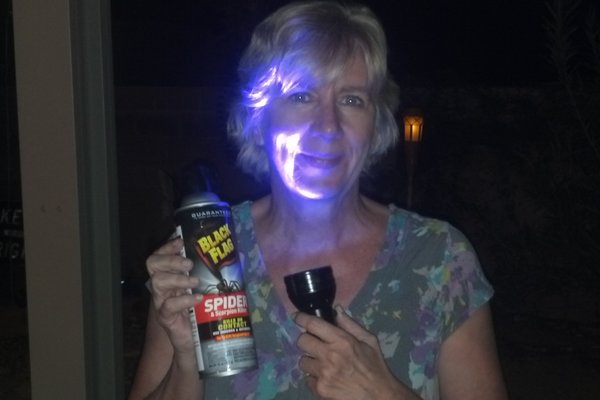 Armed with a backlight and can of arachnid killer, Ms. Cathy Sabol is ready to hunt scorpions. She has been engaged with this practice since her daughter was stung not too long ago. “They glow neon green and then I blast them with insecticide,” Sabol said. Photo Credit: Ms. Cathy Sabol

Slinking through her yard, blacklight in hand sweeping over the brown desert dirt, eyes scanning every inch of ground. Out of the corner of her eye, she sees a critter scurry across the rocks. She whirls the light over to the creature, its body glowing neon green. A scorpion has just entered its final moments, as it meets its demise from a spray can held by Ms. Cathy Sabol.

Sabol has a rather serious hate for scorpions. Her strong dislike for the creepy crawlers began over the summer when a loved one was stung and ever since, she has been killing scorpions.

“First, there was one in my kitchen light fixture. I thought it would die quickly, but no. Apparently, scorpions can live quite a long time without food. However, my main problem with scorpions is that one stung my daughter this summer and it was in the kitchen, too. What is it with my kitchen?” Sabol said.

Like many people, her reaction was disgust. And even though they continue to give her the creeps, she still strives to barricade her home from them.

“It was in the house and I screamed like a girly girl. They are so gross! Then I smashed it and said, ‘Ewww, ewwww, eww’ while I cleaned it up and trashed it,” Sabol said.

To prevent more harrowing accidents, essential precautions are taken to ensure everyone in her home can live carefree from stings.

“It creeps me out to kill them. To find them, I have to go out at night with a blacklight; They glow neon green. Then I blast them with scorpion-killing insecticide. I’m sure my neighbors think I’m rather strange, except for the neighbors who also kill scorpions,” Sabol said.

Though she has had many encounters with the dangerous creatures, Sabol has been fortunate in that she has yet to be afflicted by a sting.

“I’ve been lucky, but if stung, I’m sure I’d scream. My daughter is in college and she screamed. Her leg was numb for two days,” Sabol said.

And despite her best efforts to eradicate the arachnids from her home with a specific process, they still have found a way to crawl into her dreams.

“When I first started, I would see their glowing green image when I closed my eyes . . . that’s not what I want in my dreams,” Sabol said.

Even though Sabol may not see her hobby as odd, she still refuses to interact with scorpions, even in a thrilling TV show setting such as Fear Factor. Unless her aide is needed to remove them, she will not allow them to touch her, let alone eat a dead one encased in a sugary coating.

“Oh, that’s never going to happen! I’ve seen scorpion lollipops that cost $4, and I wonder who would ever pay for scorpion-laced food. Yuck,” Sabol said.

Although her hobby may be disturbing, she envisions herself rescuing her family from future stings and maybe even helping others who could have been stung by ones let go.