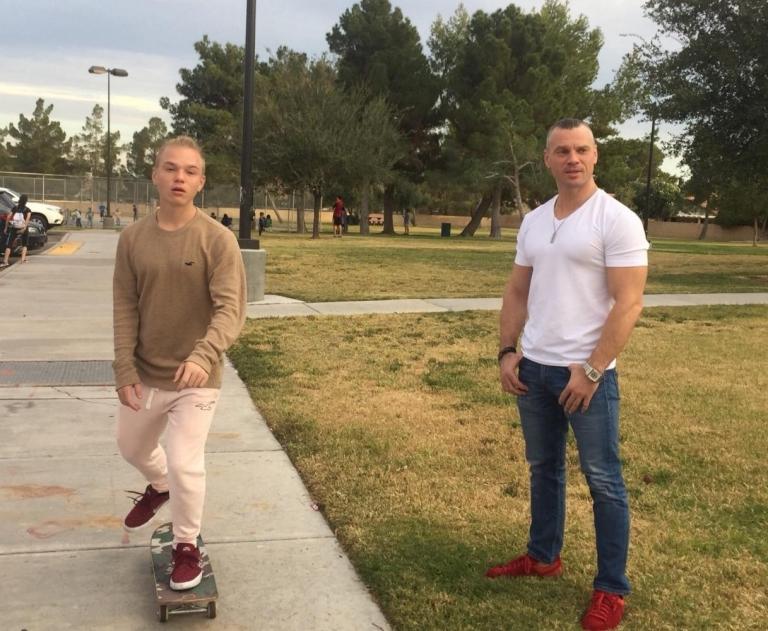 After picking him up from an airport, sophomore Yahor Buiniakou catches up with his father at Paul Mayer Park. Buinakou has been creating shirt designs for his father's job at Cirque Du Soleil since he was 10 years old. “Encouragement from peers as well as parents has definitely helped me believe in myself and become the person I am today,” Buiniakou said. “In two years, I hope to move to another company to start really getting my name out.”  Photo credit: Yahor Buiniakou

From surfing the waves at Huntington Beach to skating down ramps at a skatepark, sophomore Yahor Buiniakou takes inspiration from his adventurous hobbies to work on graphic design projects for Cirque Du Soleil.

“I think skating, surfing and snowboarding gives my work a flow, balance and vibe, which is not always easy to achieve in graphic design,” Buiniakou said. “I’m not just going down a mountain or wave when surfing or snowboarding, I’m involving myself in a community of people that enjoy the sport as much as I do. [Being in this community] makes it easier to find inspiration for designs.”

For the last five years, he has been designing graphics and completing projects that can take up to a month to finish.

“l really started becoming interested in graphic design, so I made a shirt for the environmental campaign in the circus.” Buiniakou said. “They ended up using the design, which led to me to get noticed from higher authorities.”

Starting from a trip to Montreal, Canada during his father’s tour, Buiniakou’s interest in a graphic career began when he was 10 years old. Looking outside his hotel window, he became captivated by the designs of a modern building across of him, so he replicated the building in Adobe Illustrator.

“I’m thankful that for some reason on that day I decided to try,” Buiniakou said. “I don’t think I ever would have known my career would be based off that.”

Buiniakou started to make digital shirt designs, impressing the employees of his father, who encouraged him to keep making shirts. In addition, Buiniakou began making posters accommodating the shirts. Due to his father’s connection with the circus, more design projects followed quickly.

INFOGRAPHIC: The importance of sleep for students Resting is more important for health than many think

“When I start a project, I meet with my employer to talk about the contact, payment and project requirements,” Buiniakou said. “Then, I get about one week to one month to work. Usually working at home and checking in with them about twice during the work period.”

Buiniakou hopes to continue his passion of graphic design in the future. With his newly found connections from Cirque Du Soleil, it shouldn’t be too hard for him to make his mark.

“I have gotten many connections to people in the graphic design business,” Buiniakou said. “I would like to keep working for the same employer for 2 more years, then I would like to move on to another company and hopefully a full time contract. Because I already know many printers, developers and designers, I hope I can just slowly start getting my name out there.”