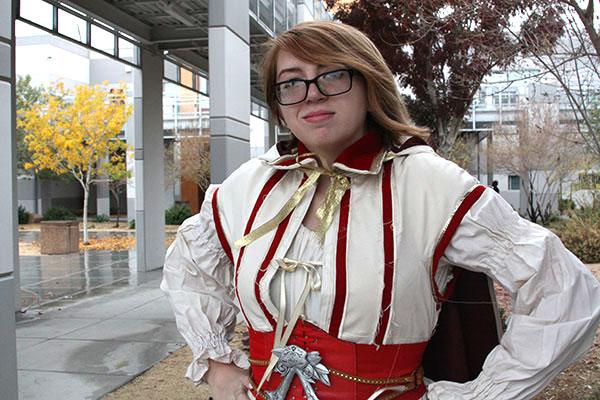 Many students have a creative side, but some are more in tune than others. For sophomore Winnie Palay, creating cosplay is her niche. Aside from sculpting and painting, she finds interest in replicating a character’s outfit to transform it into a real-life persona she can show off at conventions.

Southwest Shadow: What inspires you to create your own cosplay?

Winnie Palay: The characters. Writers, artists, actors, programmers, etc. spend a lot of time drafting these complex characters and creating a costume similar to that characters is a bit of a thrill. Cosplay is something that when you finish building it, you can step back and really just admire what you’ve done. It’s always exciting when someone recognizes your cosplay and then you can talk about the character.

Shadow: What is the hardest part about putting together your own cosplay?

WP: Figuring out how to build the costume itself without breaking the bank.  It tends to take me more time than it should to sit down and basically figure out how to construct it in a cost-effective way. In past cosplays, I’ve taken old shirts and cut them to fit my costume. It’s difficult creating a detailed cosplay on my nonexistent income.

Shadow: Do you draft and plan before sewing the pieces together? If so, how?

WP: Yes. I need some sort of visual, sketch, or image in order to figure out what fabric I need and how I should sew it. It’s nice to have a reference to go back to.

Shadow: About how long does it take you to finish constructing the entire cosplay? Do you find it hard or easy?

WP: It depends on the cosplay. Some take three months, while others I can just throw together in an hour. Again, it’s easier regarding some cosplay and difficult for others. It depends on how much fabric I need, what props I need to buy, and how many embellishments are on the costume.

Shadow: What would you say is the best part about finishing an outfit?

WP: The best part is taking a step back and admiring your own work. It’s so invigorating to compare the costume of the character and yours and have it be almost identical. It’s one of the best feelings.

Shadow: How long have you been making your own outfits? What cosplay outfits have you created so far?

WP: I believe since I was 8. I learned from my mother, who puts together amazing costumes. I have made Ezio from Assassin’s Creed, Batgirl from DC Comics, and a few causal anime characters.

Shadow: What is your favorite cosplay out of the ones that you’ve made? Why?

WP: I’d have to say my Assassin’s Creed cosplay. It was the first cosplay that I really planned out. I’m very proud of the way it turned out and I love wearing it. It took around three and half months and I have to repair it every year, but it’s definitely my favorite.

Shadow: Have you gone to any conventions? Do you plan to go to more in the future?

WP: My first convention was two years ago and I had a lot of fun. I plan on going to ComicCon 2015 in California. In Vegas, we have a lot of local conventions that my friends and I go to annually.

Shadow: Do you go to conventions wearing your cosplay? What’s it like?

WP: I have gone to cons wearing my cosplay and it’s fun to be in character around people who know who you are. There are people who recognize you and ask for pictures. It’s a reminder of how well-done your costume is.

Shadow: Do you plan on making more cosplay in the future?

WP: Absolutely! I’m currently working on “Lady Thor” and “India Jones” which are female versions of the Marvel characters.