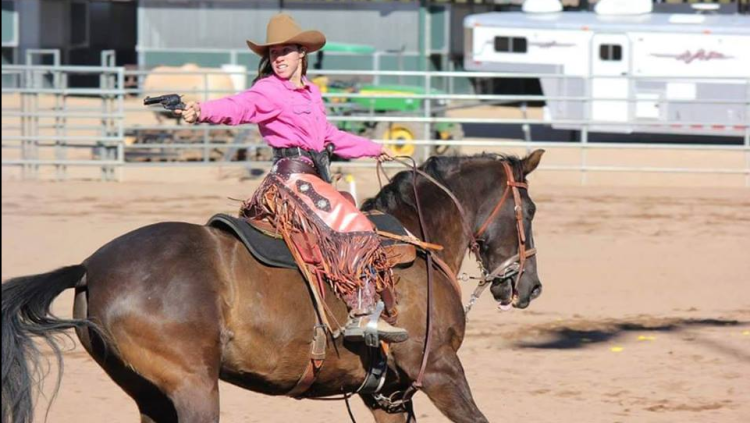 The nervous jitters set in as sophomore Samantha Ostrovsky trots across the dirt stage on her horse. It is uncertain if this time she will fall off the horse or execute the task at hand. While she struggles to maintain her balance, she must shoot the balloons as fast as she possibly can to beat her opponent.

“It’s such an overwhelming feeling because there’s so much to think about when you do the pattern and shoot at the balloons. It’s hard, but I always like a good challenge,” Ostrovsky said.

In this sport, Ostrovsky is on a horse with two 45 Long Colt guns. There is a pattern of balloons placed all around the ring. She must make her way around, at top speed, and shoot every balloon.

“I felt so nervous but very excited to be out there doing what I love to do. It was also nice being there with people that you care about supporting you from thick and thin,” Ostrovsky said.

“It’s definitely not as easy as I thought it would be. There is so much to think about when you’re riding the patterns like turning, using your feet to turn, shooting the target and aiming at it,” Ostrovsky said.

Ostrovsky has been participating in the sport since she was nine years old. Her father and brother are also mounted shooters so it makes it easier to practice and learn different techniques.

“I love the fact that my daughter is adept at riding horses and knows how to use firearms, safely. Putting them both together is a big thrill to watch. It is a highly competitive sport that requires a high level of skill — both mental and physical,” Joel Ostrovsky, Samantha’s father, said. “The sport has taught her good sportsmanship, integrity, and the ability to focus,”

Her efforts and practices have not gone to waste; the skills that she has learned have helped her win a Cowboy Mounted Shooting Association Nevada State Ladies Championship.

“I felt so nervous but very excited to be out there doing what I love to do. It was also nice being there with people that you care about supporting you from thick and thin,” Ostrovsky said.

For the CMSA Nevada State Championships, Ostrovsky had few opponents. There is four stages that she must go through, which has a different pattern of balloons each time. In order to beat her opponents, she must make all four patterns in the least amount of time.

“As I rode the courses there was about a billion things running through my head like turning the horse, aiming at the target, shooting the target and getting the pattern done right,” Ostrovsky said.

In the end, she won against all her competitors and took home the win.

“I felt so relieved that all of my hard work had finally paid off. After awards I ran to my horse and gave him the biggest hug ever because the horse was the one that helped me win the match,” Ostrovsky said. “I felt so nervous but so excited to get out there and show everyone what I can do,”

Ostrovsky continues to travel all over the U.S. for competitions: from California and Utah to Arizona and Texas. Her goal is to have a good attitude even when she doesn’t win, hitting all of the targets, and having the best time with everyone at the shoot.

“Before I did this sport my dad tried it out and I watched from the sidelines wishing I could have a chance to be apart of this amazing sport. I thank my dad for finding something that my whole family can do together,” Ostrovsky said. “My favorite thing about riding is all of the support I get from all of my friends and family,”