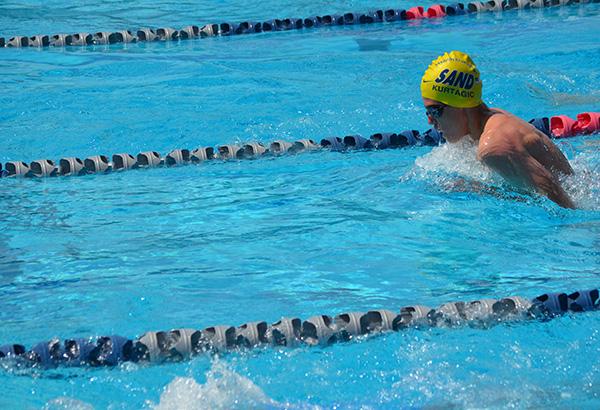 It is time to add a new name to that list: Haris Kurtagic. The freshman recently broke a Sierra Vista High School record, swimming in the individual medley with a time of 2:04.81.

“I enjoy swimming because I’m really talented at it and getting much better to the point where I’m breaking records. It is a great feeling. When you’re next to someone and the race is almost over and you want to win brings excitement for me,” Kurtagic said.

In 2007, his passion for swimming began when his family enrolled him in swimming lessons, and has supported him ever since.In pursuit of his dream, Kurtagic began swimming at a club, the Sandpipers of Nevada.

“I started having swim lessons when I was 7 and have been swimming for eight years. I loved watching Michael Phelps swim and get all these medals. I realized that I wanted to keep swimming and get as far as I possibly can in swimming,” Kurtagic said.

However, he wanted more opportunities to display his talent, and thus, joined the Sierra Vista swim team.

“I joined the Sierra Vista swim team because the club that I swim for, Sandpipers of Nevada, doesn’t give out many scholarships, but high school does,” Kurtagic said.

Swimming for Sierra Vista involves rigorous training and practice. He swims nine times a week in the morning and afternoon. Not only that, but Kurtagic performs dryland exercises, or exercises out of the water, which includes 75 pushups.

In the end, all the hard training has benefited Kurtagic.

“The IM record was from 2003, so it was pretty exciting to finally have that broken. Haris said he was really determined to break this record at our Spring Break meet, so he was pretty happy to hear that he did,” Jurvelin said.

After breaking the school record, Kurtagic has created more goals, both short-term and long-term, for himself—ranging from breaking even more school records, to the Olympics.

“I am planning on breaking more of Sierra Vista’s records throughout my high school years. World records are definitely tough, but I will go for it with all I have,” Kurtagic said.