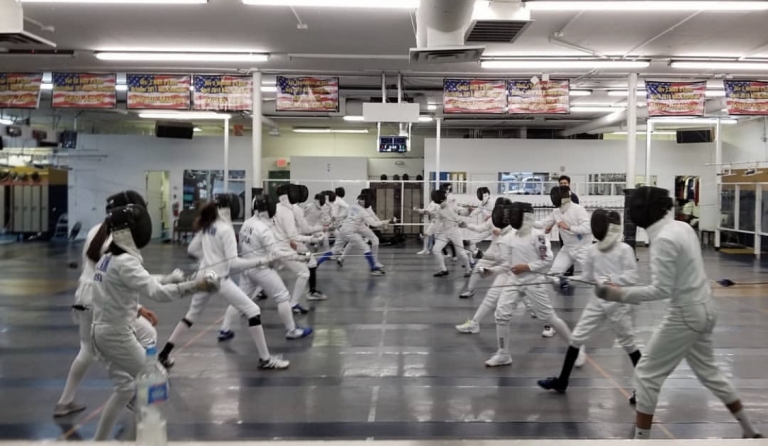 Warming up with footwork, sophomore Cheri Chan begins to practice with her team. Fencing is not a normal thing you see someone doing outside of movies, but Chan it is just part of her daily life." I really enjoy fencing and I can't wait to see how I grow and what skills I learn in the future." Chan said. Photo Credit: Battle Born Fencing Club

Trying to pick out a sport to keep her active, sophomore Cheri Chan went through her options. Chan started out trying sports such as tennis, swimming and soccer, but decided to try fencing after her friend suggested it.

“I used to do tennis but it was hard since I was like a 4′ 2″ little kid holding an adult size racket,” Chan said. “Cause it’s not that common and and I thought it was quirky at the beginning.”

Chan has spent time traveling all over the country to compete, the farthest place being Milwaukee, WI.

“Something that I really love about fencing is the adrenaline rush you get from competing,” Chan said. “Whenever I’m competing, I just get this high and I just get excited to compete and spend time with my friends.”

At the age of 11, she began training with Battle Born Fencing Club. She trains in hope to one day win first place in USA Fencing Nationals.

“A struggle that I face at each competition is the fear of losing and failing to uphold the expectations held to me by my coaches,” Chan said. “I would have to say that my current goal is winning first at nationals. I know it might take a lot of training and practicing to get it, but I would love to have my name on that first place trophy.”

“I don’t love my schedule, but I don’t hate it either,” Chan said. ” I spend a lot of my time either at practice or working on homework, leaving me with little time to hang out with my friends.”

Fencing is a contact sport, requiring opponents to be protected and safe with the use of swords. Having to wear certain types of protective gear, Chan has to be careful as the equipment she uses to train is dangerous.

“One time at practice, one of my teammates wasn’t wearing her mask,” Chan said. “Another pair of teammates were fencing next to her and the sword fell apart and it hit her in the back of her neck, causing her to get paralyzed.”

Given the amount of time that Chan spends training, she has learned a few valuable lessons.

“I believe in her and that she can do better so I push her to do her best in fencing,” Chan’s father said. “After all, this sport is unique making her one of few who actually do consider fencing something special outside of movies.”

While she is unsure of what her future in fencing will be, she does know that the hours of training taught her the important of self-discipline.

”I’ve learned that winning and succeeding feels great and though losing may suck, I’ve learned a lot from each lost and have grown as a person every time,” Chan said.