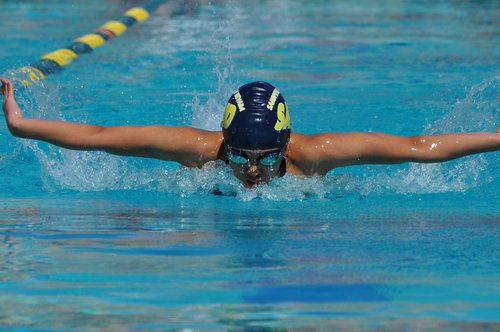 Swimming the butterfly stroke, Cuison races to finish first. "I used to want to go to the Olympics but then I realized that that was only for the crazy talented," Cuison said. "Now I just want to swim at the college level and try out for those conference meets.” Photo Credit: Fermin Cuison

Diving into the pool, cold water splashes on her face. The smell of chlorine fills the air, while swimmers pace back and fourth hoping to beat their personal records. Coaches and swimmers surround the pool, waiting for the whistle to blow.

At the age of 11, junior Danyael Cuison began training with the Sandpipers of Nevada. Inspired by Michael Phelps, Cuison started taking lap classes at the swim school, Water Wings.

“I watched the 2008 Olympics and I thought that  Michael Phelps was really cool,” Cuison said. “My team sent a guy to the Olympics and he actually got third in the 100 breaststroke and he was in Phelps last olympic relay, which is why I joined the team.”

Along with her club team, Cuison swims on the Sierra Vista varsity swim team.

“I’m ranked 13th out of the state and my club is ranked fourth in the nation,” Cuison said. “I used to want to go to the Olympics but then I realized that that was only for the crazy talented, so now I just want to swim at the college level and try out for those conference meets.”

Competing on two teams, Cuison trains over 20 hours a week.  After early morning practices, she gets ready for school in the pool’s locker room and eats breakfast in the car on the way to school.

“I usually fit in a two hour practice before and after school,” Cuison said. “I usually get around 7 hours of sleep on morning practice nights which is the same amount as when I don’t have morning practice, but I just sleep a lot earlier.”

Along with her water training, Cuison has dryland conditioning and meets every month.

“Dryland training is where we do training outside of the pool so we do a lot of running to keep up our cardiovascular endurance,” Cuison said. “I mainly do the butterfly which is where you make minimum contact with the water. Swimming is a lot harder than dryland training because you have to do everything with limited breathing.”

“It’s a tough routine,” father Fermin Cuison said. “But we’re willing to support our daughter as long as she’s passionate in it.”

Cuison’s main goal is to qualify for the conference team in college. She plans to keep swimming until she graduates college.

“You just have to have a lot of passion for something if you want to do it and if you do, it can lead to bigger things,” Cuison said.