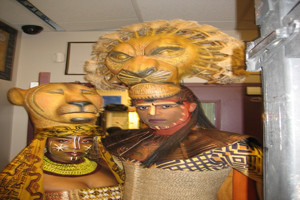 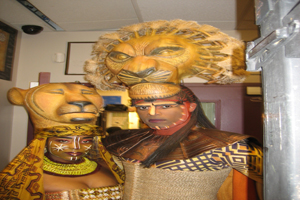 Derrick Davis, a 30-year old Las Vegas local, has always been in love with being on stage. He’s come a long way from the first time he sat in the audience and watched Maury Yeston’s musical “Phantom” to performing in local musicals. For the past few years, Davis has played Mufasa in Las Vegas’ production of Disney’s “The Lion King,” but he’s taking a step forward to the big stage on Broadway to continue the role he originated in Las Vegas, as Mufasa in “The Lion King.”

“I always loved to sing; I always love to dance around. My friends would constantly make fun of me for being so artsy, I was a total nerd,” declares Davis.

Their mother and father raised Davis in Long Island, New York with his older brother. His father used to play jazz music around their house and his mother would play gospel music. In junior high school, Davis sang “My Girl” for one of his school’s concerts. It was his first major public performance.

“The audience went bananas. I was like ‘Oh my god, they liked me!’ I was not the popular kid. So, it was one of those experiences where you realize what you love to do and have it accepted by people and I immediately knew this is what I was going to do for the rest of my life,” states Davis.

Davis has appeared in many performances from church musicals to regional theater to opera. After studying opera at Long Island University C.W. Post Campus, Davis eventually landed the role of Mufasa in “The Lion King.” Transitioning from opera to musical theatre may have been difficult, but Davis still had the challenge of adapting to the booming city of Las Vegas.

“I’d never been to Las Vegas in my entire life. This is my first time but I love it. I bought a house here! People tell me to sell it, but I know I’ll be back. I love that you can be in the heart of the city, in the hustle and bustle, and 10 minutes later, you can be on top of a mountain somewhere; it’s insane. It’s the best of both world’s and the food is to die for,” chuckles Davis.

INFOGRAPHIC: Religion’s impact on teens What impact does religion have on teen's lives

Davis is eternally dedicated to his young fans who come to see “The Lion King.” He was a minister for 14 years at his church in New York and dealt mostly with the youth population. He is always trying to give back to those around him.

Davis puts his whole heart into all that he does and all that he hopes to achieve. He is sure to thrive in New York and we wish him the best of luck!