Designer and programmer: Meet Caleb Hewitson What started out as a simple side project has turned into something more 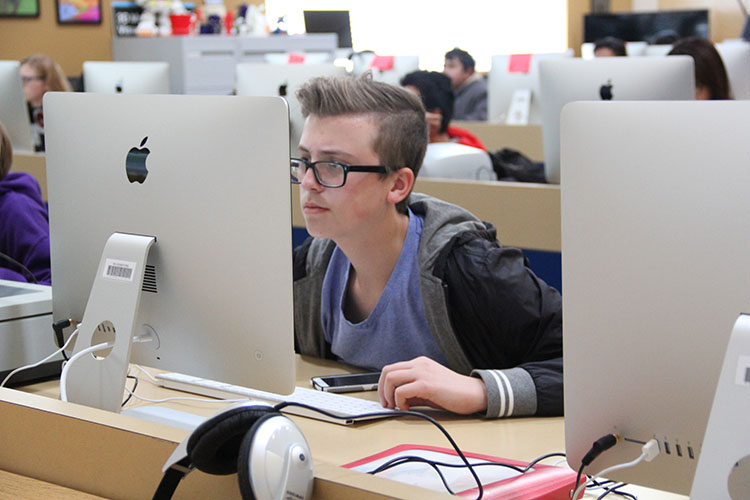 Two times a week, for hours on end, sophomore Caleb Hewitson is typing away at his computer, working and programming his game, Mined Grinder. This game started out as an idea from his father, but now it is coming to life.

Hewitson built his first computer in the sixth grade. It was time consuming and challenging, but as he powered the computer on, for the first time, his passion for it began.

“When I first built my computer I got a little frustrated. When putting the CPU on the motherboard, you have to insert it perfectly, or you will dent one of the micro-sized pins on the bottom,” Hewitson said. “And if just one of those is bent, it renders the CPU useless. But I eventually got it in correctly.”

He originally started by doing basic things on the computer, like virus removal. Hewitson worked his way up to hard drive cleaning/defragmentation, coding and modeling.

“I think the most challenging part is modeling. With coding you can find resources online if you get stuck, whereas with modeling, you are creating from scratch,” Hewitson said.

Mined Grinder is a horror game that is based off of the Slender game. In this game a character gets stuck in a mine and the player has to escape the mine without being caught by the Grinder.

“This game has affected my life by adding more to my daily schedule. However, unlike other things on my schedule, I don’t view the game as a burden, but instead as an opportunity ,” Hewitson said.

Hewitson has been working on this game since December of last year. Since then, the game has been modified and improved on. It is now halfway to completion.

“I hope to release this upcoming year, with a finished and well constructed game,” Hewitson said.

The game is currently being developed for PC and Mac, but once its done Hewitson plans on transferring it to mobile devices.

“I hoped I would progress in making the game, but I guess I never really thought it would get this far. I have gotten to the point where I don’t work on the game for a few weeks, but never given up,” Hewitson said.