Determined Violist: Alyssa Colligas Aspires to be a professional musician after seven years of experience 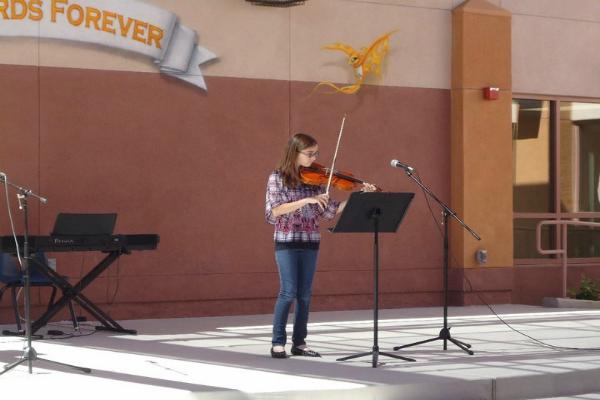 As she took a deep breath, Alyssa Colligas anxiously steps up to the stage and begins playing her viola in front of a huge crowd. Colligas was performing at a school talent show for fun while in the sixth grade. “I was really nervous because that was my first time performing in front of people. I was glad to have my mom there for support and it was cool because I was the only person who played an instrument so I was very proud of myself,” Colligas said. Photo Credit: Alyssa Colligas

The heat of the spotlights radiate onto her and gleam across the metal strings. The light onstage blocks out the audience, making her feel as if she were entirely alone. But in reality, she is in front of hundreds of people watching in anticipation as she draws in a breath and glides her bow across the strings.

Or at least, that is how sophomore Alyssa Colligas dreams of her performance in front of an audience.

Her instrumental solos are what tend to draw people’s attention. But, people often confuse her viola for a violin at some of her performances.

“I always tell people: It’s not a violin, it’s a viola! Sure maybe their looks are similar, but when you listen closely, you can hear the amazing difference between the two,” Colligas said.

For the past seven years, Colligas has been playing the viola. Her love for music first began back in elementary school when her music teacher would allow the class to listen to all types of instruments.

“I thought all of the string instruments sounded so perfect, especially when they came together as an orchestra. The second I heard a viola I instantly fell in love with it,” Colligas said.

Having musicians for parents, Colligas aspired to be like them and decided she would also pick up an instrument.

“Before playing viola, my dad tried teaching me how to play the guitar. I thought it was cool but it didn’t seem like the right instrument for me. But after I heard the recording of a viola in music class, I was so amazed that my mom took me out and got me one that same day,” Colligas said.

As Colligas began playing viola, both of her parents noticed her talent and passion for music rapidly grow. As middle school approached, her parents encouraged her to join the school’s orchestra.

“It was a really big deal for me. My parents were big supporters and it was the first time I had joined an actual orchestra,” Colligas said.

When she was thirteen, she became apart of the Las Vegas Youth Orchestras (LVYO). Since then, she has performed for orchestra at the Smith Center for the Performing Arts three times, twice with LVYO and once with Honors Orchestra. Colligas also played first chair viola all year in eighth grade in LVYO and in her middle school’s chamber orchestra. When she performed at the Henderson Pavilion, she was given the privilege to play alongside Alpin Hong (pianist).

“The best thing about playing the viola for me is standing in my room practicing and imagining myself on a big stage in front of a ton of people because it gives me a feeling of confidence that I don’t think I would get any other way,” Colligas said.

Not only is she gaining knowledge in music, she is succeeding when it comes to big performances while playing her favorite instrument. However, being successful also means maintaining her busy schedule, which can come with big responsibilities. While playing for the orchestra, Colligas is also involved in Student Council and coaches for E-Soccer of Southern Nevada.

“It can get hard to balance my time with orchestra and Student Council because they are both my passions, but I’ve definitely learned how to prioritize. When it’s time to teach a soccer league for the children with special needs, I put soccer practices first, because I know the kids need me to be there,” Colligas said.

Through it all, Colligas continues to manage her time between orchestra, school, Student Council, coaching soccer and family and friends.

“Being in orchestra taught me a lot, but most importantly I’d say to treat the people around you as if they are family. I feel like I am more responsible thanks to orchestra. I am also able to work better with others and listen to things around me. I know I’ve changed in many ways for the best because of orchestra,” Colligas said.