Fashion Design teacher and denim enthusiast: Meet Nicole Carlson She finds her next steps after graduating from FIDM 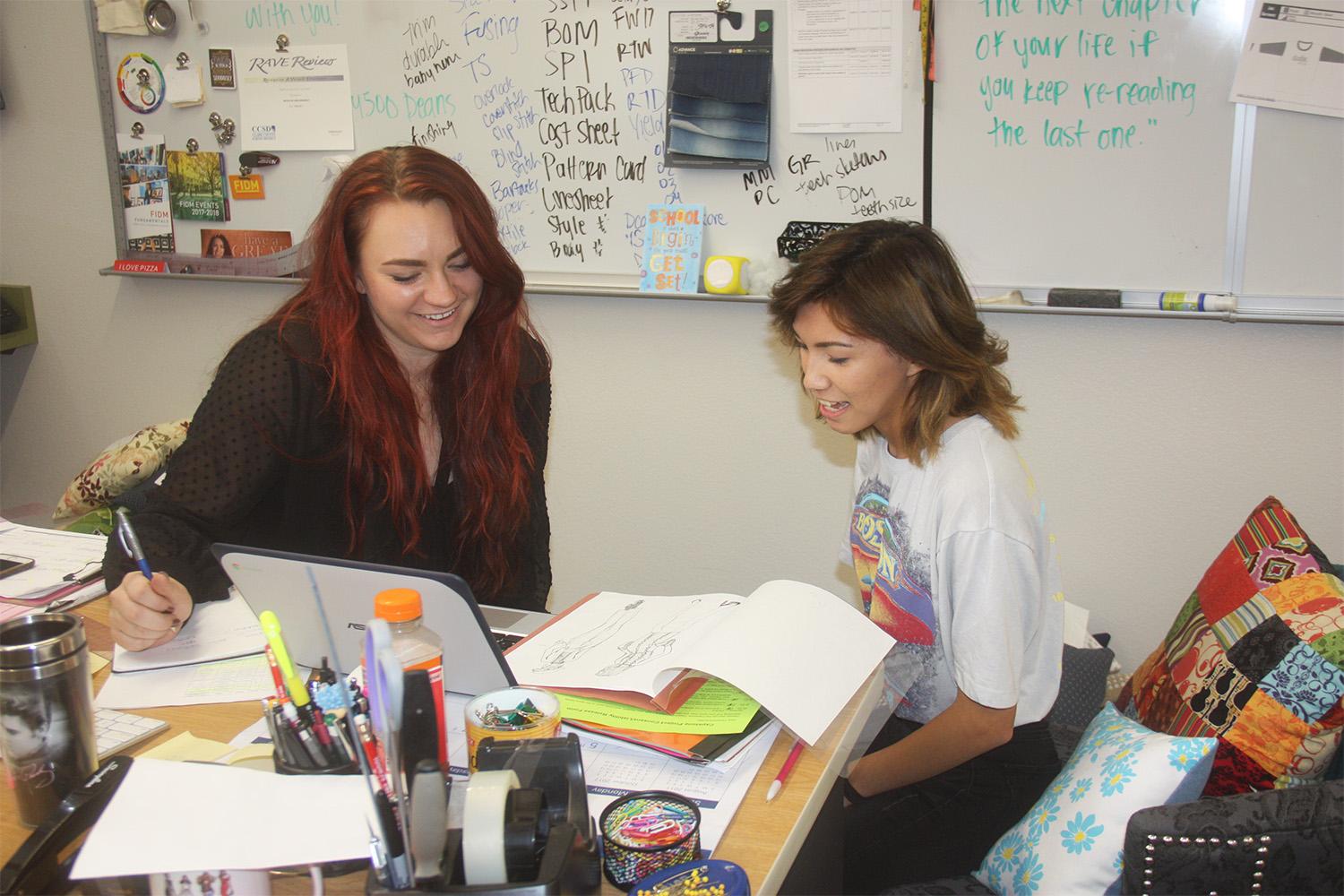 New staff member Nicole Carlson assists senior Alyssa Del Rosario with her sketches for her own runway line. The teacher discovered her passion for clothing in Ms. Shannon Sheldon's Fashion class. “They’re running their sketches by me so I can make sure they’re to their skill level and giving them input from a designer level,” Carlson said. “I’m really impressed so far, their ideas are stunning and they are coming up with stuff I never would have thought of.” Photo Credit: Maggie Shepard

After graduating from Fashion Institute of Design Merchandising in Los Angeles, Fashion Design teacher Nicole Carlson moved back to the Las Vegas valley to become a teacher and hopefully a future business owner.

“While moving back, this job came into play and I thought it was perfect,” Carlson said. “I can still do my passion, still share my passion and be able to pass it on to the next generation.”

“She entered Fashion Forward when she was a senior and she placed in the finals,” Sheldon said. “I’m delighted that she happened to move home and I feel we are very lucky to have her and learn from her.”

Applying to FIDM, Carlson knew it was an expensive school, but was also aware of the knowledge she would gain in the future. After graduating from Las Vegas High School in 2013, she moved to the FIDM campus in the heart of Downtown Los Angeles.

“I actually really liked [FIDM] and then towards the end, I was just like over it,” Carlson said. “You have that whole downtown scene, you have to pay for parking everywhere . . . and it started to get a little overwhelming.”

Typically, FIDM students must wait until their second year to start their internship; however, Carlson took matters into her own hands. She went to the Magic showroom and was offered an internship. One day while Carlson was working, the former head design director for Guess walked in and offered her a job position as an assistant.

“The lady was wanted back at Guess and she took me with her,” Carlson said. “When I was at Guess that’s where I fell in love with [denim], it was about making it different from last season and it was so technical.”

As the end of her education at FIDM was approaching in Jan. 2017, Carlson’s mom got into an accident which convinced her to move back home.

After considering moving away from the FIDM scene, Carlson considered how the move back would help her business flourish. Because it was more expensive to live on her own in LA, she realized moving would give her an opportunity to save and possibly find investors to grow her business.

”I come from a denim background,” Carlson said. “I’ve designed jeans for four and a half years, but to find those perfect pair of jeans was impossible.”

When she was presented with the job opportunity from Sheldon, Carlson realized that this was a great job opportunity. She could teach through her business and industry license rather than a teaching license, which allowed her to continue to help her mom and save money for her future business.

“This is perfect,” Carlson said. “I can share my passion, still do my passion and pass it on to the next generation in the process.”

Coming from the huge denim industry in LA, Carlson realized it is much smaller in Las Vegas. Despite the beginning struggles, she remains optimistic about having her business up and running within one to five years.

“Going into the fashion world, it was everything I thought it would be, it’s The Devil Wears Prada, but people tend not to take criticism very well, so I would just say to take it [constructively] and grow up a little,” Carlson said.