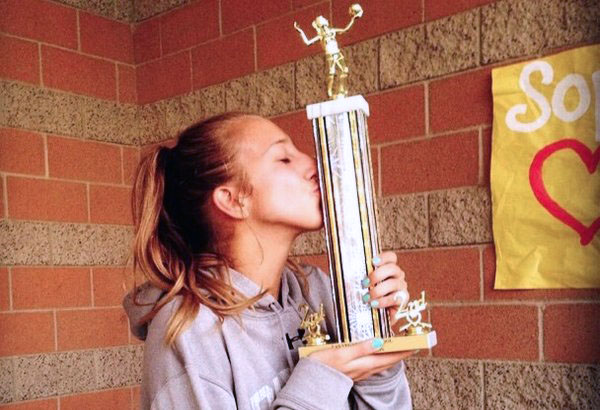 Harsh breaths puff out of her mouth as sweat plops onto the court from her forehead. She takes a few steps forward, puts her body into the correct stance, and with the right amount of force, brings her arms up to push the incoming ball back across the net. The opposing player attempts to reciprocate the previous steps, but isn’t quite fast enough. The ball drops to the ground, bouncing off the court; the crowd howls with excitement.

“I’ve been playing volleyball since the age of eight. I got involved with the sport because my mom had played and I wanted to be just like her. I’m on Durango High School’s team; I’m their starting outside hitter,” Taylor said.

Recently, Taylor was named Athlete of the Week by the Las Vegas Review Journal, along with 111 other high school sports players in the valley. However, 109 were named for football while only two, including Taylor, were named for girls volleyball.

“I was recognized because I had a career high game against Cimarron. I had 31 kills,” Taylor said.

Family and friends also shared their congratulations through text and social media.

“I knew Carly had the drive, and I felt like she had to prove something. When she puts her mind to it, she gets it done. I can’t be any prouder. Even though my daughter is a solid athlete, I am most proud of the person she is, and the person she will become,” Taylor’s mother said.

Although Taylor has received high praise, several people have told her otherwise, including those who have guided her in the sport.

“I’ve had coaches tell me that I was never going to be good enough to play high-level volleyball, and it set back my confidence tremendously. It affected my play and mental toughness, a key component to the sport of volleyball. However, with time I was able to push those doubts and negative thoughts away and access my true potential,” Taylor said.

Taylor must also deal with numerous injuries, yet she plays through them, ignoring the pain.

“I battle with tendonitis everyday; it’s excruciating, but I always tell myself ‘pain is temporary.’ If you quit, that’ll last forever, but the pain will subside. I just recently sprained my thumb in the beginning of a game, but I kept on playing. When the match was finally over, however, I ran to the trainer in tears. I’m not a quitter and I earned my spot, so if pushing through pain is what I have to do, it’s what I’m going to do,” Taylor said.

Additionally, she juggles work and school, which can become difficult when participating in clubs as well.

“It is extremely tough to balance sports, school, and work. But if you love what you do, it makes it a little easier. I’m also an active Distributive Education Clubs of America (DECA) and National Honor Society (NHS) member,” Taylor said.

Even so, Taylor strives to become a professional volleyball player. She battles through a hectic schedule of school five days a week, work several days of the week and attends club meetings held a few days every month, but ensures she always has time for practice and games.

“If I were to play volleyball professionally, I’d be the happiest girl in the world,” Taylor said.

Taylor hopes to continue her career for as long as possible. To achieve the status of a pro athlete, she looks toward the careers of several professional players for inspiration.

“I’m in love with Matt Anderson. He’s the captain for the USA Men’s Volleyball team. We’re going to get married one day, he just doesn’t know it yet. I also really look up to Kerri Walsh Jennings,” Taylor said.

In addition to having celebrity role models to emulate, Taylor has teammates from whom she continually receives encouragement.

“Being on a volleyball team makes me feel like I have 11 sisters. We may fight, but at the end of the day, we love each other and understand that in order to play well, we need to be unified,” Taylor said.

Taylor has learned many life lessons while participating in volleyball that have helped her to achieve an elite rank among other athletes in Las Vegas.