Football and You: A handy FAQ Get ready for football season 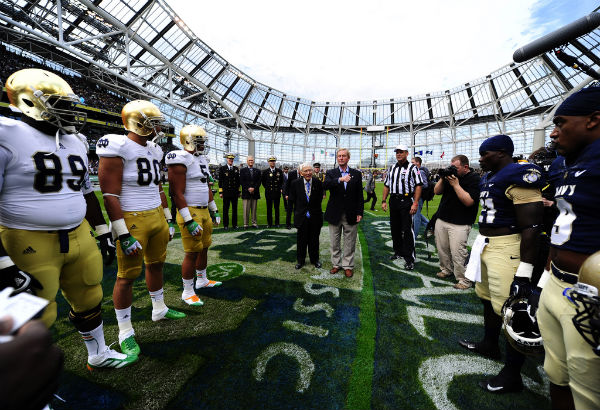 As one of the fundamental aspects of football, two teams decide who will receive the ball and start on offense. Like other sports, football players must adhere to a set of defined rules. PC: Senior Chief Mass Communication Specialist Michael Lewis of the U.S. Navy

Now that football season is right around the corner, fans of all ages will gather around their television to watch the most popular sport in America. However, not everyone understands the workings and rules of the game. To assist, here are answers to the most frequently asked questions.

Q: Why is the sport called “football” if the players use their hands most of the time?

A: Although football players typically play with their hands, it did not start out like that. The sport originated from association football (soccer) and rugby, and therefore incorporated their rules. Due to Harvard University’s reluctance to rename the sport “rugby,” it continued to be called “football” at an international level. However, it is called “gridiron” or “American football,” similar to how the sport we like to call “soccer” is known as “football” internationally.

Q: What is a touchdown and how many points is it worth?

A: Teams score by making touchdowns, which are accomplished by running into the endzone (the scoring area) with the football. Touchdowns are worth six points, but adding on an extra point (a field goal) or two point conversion (scoring another touchdown immediately after a previous successful touchdown), can be worth seven or eight points.


Q: What are downs and how many downs does a team get?

A: Downs are the number of attempts the offensive team has to advance 10 yards, or if they are close enough, to score a touchdown. The offense has four downs to move the ball, and if they fail to move 10 yards after three downs, they can punt (where the kicker drops the ball from his hands and kicks it before it hits the ground), or use the fourth down as the final attempt to move forward the remaining yards. However, if the offense fails to move forward on the fourth down, it is a turnover on downs, causing the opposing team’s offense to attempt a touchdown from where the team failed.

Q: What is a field goal?

A: A field goal is when the player designated as kicker place kicks (kicks the ball while it is being held) and attempts to make it in between the goalposts and above the crossbar. Worth three points, field goals are usually attempted when it is fourth down, and the team is close in distance to scoring.

Q: How does a player or team receive a penalty and how does it affect the game?

A: Teams receive penalties when they break game rules. For example, an offensive (the side trying to score) player cannot get a headstart before the ball is snapped, and there should not be any head-to-head contact—only to name a few. Penalties can affect the game on a small or large scale. With the object of the game being to move the ball forward and score, a penalty can prohibit that.

Q: How many teams are there and are they divided up into divisions?

A: In the National Football League (NFL), there are 32 teams, and they are split into two 16-team conferences, the American Football Conference (AFC) and National Football Conference (NFC). These 16 teams are then split into four teams of four based on location (North, South, East, West). That is not all, for in college football, there are 128 teams in Division I Football Bowl Subdivision (the highest level of college football). Just like the NFL, college teams play in different conferences based on their location.

Q: I thought games occur only on Sunday; why are there games on Saturday and weekdays too?

A: Yes, the majority of Sundays in fall and winter are filled with NFL games, but there are games during the weekdays and to start off your weekend. The NFL has games on Thursday and Monday, dubbed Thursday Night Football and Monday Night Football, to help increase viewership and expand more audiences to the NFL. There is football on Saturday because that’s when the majority of college football games are played. College football also plays on some weekdays and high school football games are played on Fridays.

Q: How long do games last?

A: Games typically last an average of three hours and 12 minutes. A game consists of four 15-minute quarters. However, time is chewed up when referees review touchdowns or turnovers (when the offense loses the ball to the defense), and the increase of penalties being called. Also, when a game heads into overtime (when both teams are tied after four quarters), this adds to the runtime.

With these explanations of some of the rules, workings and common questions of the game, viewers have a new understanding of the game.