For The Love of Music and Vinyl: Meet Hugo Silva 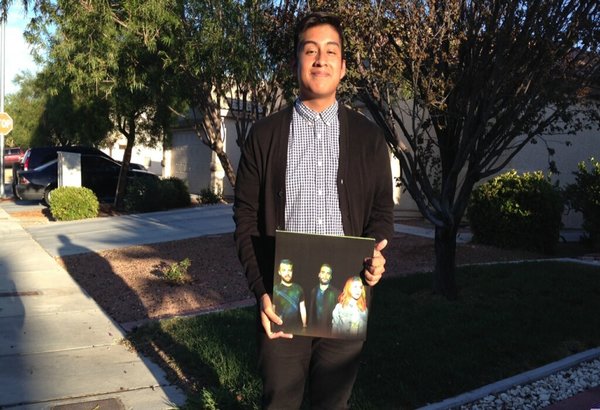 Hugo Silva ('15) shows off his Paramore self-titled album vinyl. Silva got the vinyl in April of 2013. "Collecting vinyl has proven to be one of the best hobbies that I've gone into. It's really fun but it always leaves me with an empty wallet," Silva said. Photo Credit: Hugo Silva

Meet Hugo Silva, a senior in the Dental Assisting program with a giant love for all music genres.  Silva’s passion for music stems from his appreciation of music’s composition, details and influence on people. He loves to listen to how the instruments, the effects and mastering all go together. He collects vinyl to keep his options fresh. Sometimes,  Silva will impulse buy vinyl instead of actually buying necessities, like school clothes or supplies.

Silva truly started to listen and love music when he was in the fifth grade. Before that, though, he would only listen to music on the radio, his sister’s music and his relative’s music.

“It wasn’t until the fifth grade that I began discovering music that I really loved and listened to on my own will rather than it being shoved down my throat. I believe it’s important to create your own music foundation so that you can discover music that you really love and feel passionate about,” Silva said.

He first fell in love with Paramore, then broadened his interests into Simple Plan, We The Kings, Boys Like Girls and Three Days Grace. Before allowing himself to be open to all music genres, Silva limited himself to only alternative rock.

“I liked alternative rock because it was something new to me. It’s crazy because those are the artists I don’t listen to anymore, aside from Paramore,” Silva said.

As Silva grew older, he broke through the mentality of only­­­ listening to alternative rock. His listening now varies from indie, pop, instrumentals, ­film scores and more.

“His choice of music is really unique. We bond with specific types of music, even though he loves all types of music. I usually run to him when I want new music or album for a road trip,” senior Tiffany Repalda said.

Silva started buying vinyl starting in Dec. of 2011 because his favorite artist Paramore was selling a limited edition box set with a vinyl copy of the album. However, Silva truly got interested in collecting vinyl in April of 2013. Collecting vinyl became more satisfying to Silva than collecting CDs.

“I started buying vinyl records because my favorite artist at the time released a limited edition box set of four 7” singles. I had a friend of mine come to my house once and she brought her turntable with about fifteen records to play. It was seeing that collection and seeing the motion of the needle on the record making music that really made me want to continue collecting. I can’t really choose a favorite record. Each one that I own brings its own element to the table.” Silva said.

Just like his varied music taste, his collection of vinyls vary, too. When he collects, he likes to add variety to his collection so that he does not get bored and lose interest in a specific artist. Right now he has 11 vinyl in his collection, a small number due to the cost and other priorities.  When it comes to buying vinyl, he does not really have a process of selecting one.

“11 vinyl is already like a $250 investment, and though I like collecting it, I have to give priority to other things before I spend on something I want. There isn’t a process in buying a record. If you have extra money and find one that you like, you just buy it,” Silva said.

“There’s definitely music that can make you feel like running five miles and songs that can engage those ‘2 AM thoughts.’ That’s what makes music so powerful. I may not feel sad or upbeat, but music has the power to sway your emotions. That’s what makes it so good. It is through the feelings given from music that we are able to not only connect to artist but to also the people around us. I’ve connected to people not only through listening to music but also through playing music. It’s a universal language that everyone understands and it really brings people closer together,” Silva said.