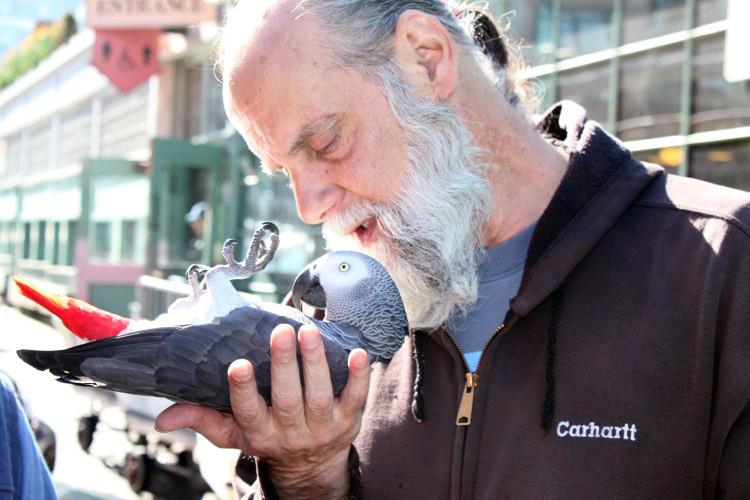 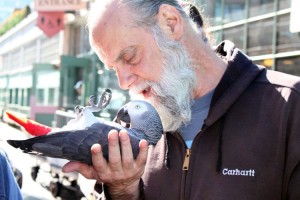 On the corner of Pike Place and Pine Street in downtown Seattle, Washington, Congo African Grey parrot, Phineas Phogg, executes handstands, walkovers, pretend sleeping, playing dead, and vocalizing various sounds such as a bomb explosion. His owner, Christopher Van Inga, also known as the birdman by his fans, has developed a deep love for Phineas and insists on sharing his bird’s intelligence with others.

Considering the average lifespan of an African Grey parrot is approximately 50 years, Phineas is a young parrot, almost 19 years old, with a long life ahead of him.

“I got him from his mommy in Chicago 18 years ago from a breeder. We’ve been here for 12 years, since Phineas was six,” Inga said.

Rather than being simple, boring performers, Inga and Phineas grab the attention of the audience and interact with them in any situation. They allow complete strangers to hold the bird and be a part of their performance. Additionally, they catch the hearts of the audience through Inga’s jokes or Phineas’s funny tricks. The eclectic attitude of the parrot compliments the owner’s heartwarming and compassionate, yet hysterical personality.

Even though the two are gaining popularity due to their amusing relationship, Inga refuses to let the fame be about himself, and instead glorifies his best friend, Phineas. This is evident in his passion for exposing his parrot’s talent.

“As far as what [Phineas] does, he does cool things all the time; he gets in trouble all the time, too,” Inga said.

Based on personality and intelligence, he’s more than the average parrot. He observes the world around him to incorporate skills into the performance. Inga said Phineas learned how to meow from a cat food commercial on television. Now, that is one of Phineas’s more popular tricks.

According to Inga, the most rewarding part of showcasing Phineas is the expressions on other people’s faces as the grey and white fowl performs daredevil tricks and remarkable skills.

“A little girl… was in her daddy’s arms. He did a ‘kitty kitty’ [the meow] and the little girl looked at me like her world was shattered,” Inga said.

On top of being friendly and personable, Phineas is quite a “ladies man,” whistling at people that pass by and attracting Pike Place visitors to enjoy the entertainment and make small donations.

“He likes people; he’s a social animal. [Parrots] enjoy it; they enjoy being out.”

He’s amusing, he’s skilled, and he’s intelligent. Not only is Phineas Phogg incredible for being a mammal in feathers, but he is an incredible street performer. He and his owner perform every day at approximately 10:30 a.m at the Pike Place Market. For more information on Phineas or Inga, visit www.pikeplaceparrot.com. For information on the African Grey parrot, visit http://www.africancongogrey.com/.

The following story was produced during the 2012 JEA/NSPA Journalism Conference.