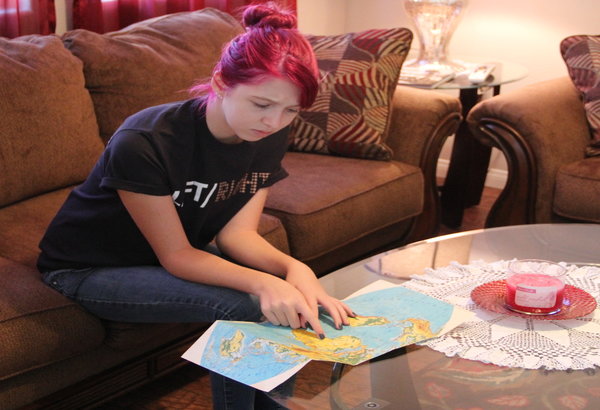 Trying to locate Tanzania off the top of your head can be a difficult task. However, if more American youths researched current news and countries, rattling off the locations of Uganda, Belize and Micronesia might not be so challenging. "By simply scanning the map and learning which country is where, I'm better equipped to follow the news and travel," Drevetzki said. Photo Credit: Alexis Drevetzki

Take a look at a globe and locate Sudan. You could easily spin it around, scan over the continents for a second, and locate it. But if you take all the names away, leaving just the outlines of the world, would you still know? You spin the globe again, but your eyes wander longer, your finger hovers over the continents, and you feel confused.

“I don’t find myself well-versed in geography. We hear what’s being described on the news, but we don’t fully understand it since we don’t live in that area,” sophomore Janeen Soria said.

This could be the case for too many American youths. Having the ability to travel, understand the news and know direction are all part of knowing geography. Getting involved in the news and studying current events can help to gain geographic knowledge.

“Learning geography is important because it does affect what’s going on in our world today, especially with as many conflicts that exist that we are directly involved in. If the students aren’t aware of where they are in the world, then they don’t know some of the decisions they might need to make in order to better understand their world,” World History teacher Mrs. Jennifer Brant said.

A study conducted by The National Geographic-Roper Public Affairs surveyed 510 US citizens ages 18-24 on not just the location of the worlds’ countries and their names, but also the events that occur within these places and importance of geographic factors.

“The Roper poll is alarming, as it has been continuously for the past several years,” said Douglas Richardson, executive director of the Association of American Geographers in Washington, D.C., about the surprising number of Americans who scored poorly in the poll.

The average person who participated in the poll scored a 54 percent. This indicates that world geography may not be a strong suit for American youths.

“Young Americans just don’t seem to have much interest in the world outside of the U.S.,” David Rutherford, a specialist in geography education at the National Geographic Society in Washington, D.C., said.

The poll provides evidence that young Americans are unaware of their world. The outcomes imply that understanding world locations isn’t a top priority for the majority of teens and young adults. However, it isn’t just world geography they are unfamiliar with, but U.S., too.

“Students don’t think that geography affects them, they’re concerned with just what is right around them, so they would probably be able to give me a map of Las Vegas very well, but when you’re talking more world wide geography, they don’t think it impacts their life directly,” Brant said.

Geography is used throughout life as it is brought up everyday in current events. Not understanding geography could lead to potential language barriers, trouble traveling, difficulty with directions and complications with map reading.

“The outcomes don’t surprise me because American education doesn’t put that much emphasis on anything global,” sophomore Samrawit Misiker said.

However, young Americans are starting to break out of their geographic ineptitude. Enrollment in geography courses in colleges has been on the rise, which is mostly in part to technology, according to the study. Also, what once was only 11 percent of Americans using the Internet to access news has now grown to 27 percent.

“It’s a step for students to have open minds towards the rest of the world, understanding that some countries don’t have what we have,” Soria said.

National Geographic has also found a way to help by launching a campaign called My Wonderful World to increase knowledge of the globe, giving resources to parents and teachers to nurture the learning of their children. There is even a test online to access one’s literacy of the world.

“Geography is one of those things where a lot of times it’s approached as just memorizing names on a map rather than looking at it as a big picture and how geography actually affects the way people live. If you don’t make geography relevant, then you just have people memorizing names on a map, and it’s not that interesting,” World History teacher Mr. Joseph Juliano said.

Although the Roper poll outcomes may come as a shock to some, it will hopefully be a wakeup call to American youths. Understanding geography isn’t just remembering names on a map, it’s knowing regions of the world, what occurs in these places, how the people live and so on.

“Things go on all over the world and you understand it more when you know geography,” Misiker said.