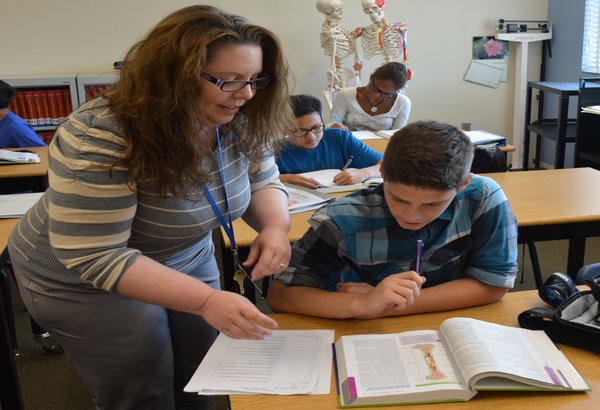 Mrs. Donna Hatch appears as a normal teacher, helping her student, sophomore Esad Mrkulic, with a question on bones. However, when not in the classroom, Hatch endeavors in many unexpected interests, but still makes room for her love of teaching. "I find it rewarding when you see a student's "ah ha" moment when they learn something new," Hatch said. Photo Credit: Alexis Drevetzki

Rock and roll, stupid comedy, ghosts and customer service are an odd combination, yet they are the complete make up of one of our newest teachers. She also partakes in saving lives on Saturdays as the lead respiratory therapist at Apria Healthcare and a full-time college student studying to become a healthcare administrator at PIMA Medical Institute.

Meet Mrs. Donna Hatch. Her lifestyle is a mix of diverse interests, beliefs and aspirations that all come together to make for one intriguing individual.

“I love listening to rock because it allows me to release some of my stress. It’s tough and I like the way it sounds. It’s real music; you have to play actual instruments and not rely on technology to produce the music,” Hatch said.

As of late, one of her favorite bands is the famous Metallica and her playlist is a composition of intense heavy metal. However, there are a few diverse songs on her iPhone that may come as a surprise.

“There’s definitely some songs that would surprise people. Rock is my favorite, but I like all kinds of music, except for country. I have songs from Les Misérables on there,” Hatch said.

Additionally, her likes don’t end with the emphatic sounds of rock. She enjoys a varied selection of movies, especially cheesy comedies filled with dumb jokes.

“I have favorite movies in different categories. My favorite comedy is “Meet the Parents.” Every time it’s on, I need to watch it because it’s hilarious. I like stupid comedy like that. My favorite action movie is “The Matrix” because it’s awesome and makes you really think about things. I’m a critical thinker; I over think about everything,” Hatch said.

Yet, Hatch originally wanted to join the enticing world of food. She currently works as the Human Diseases and Health Science teacher to bring medical knowledge to bright, young minds. She is also a diligent respiratory therapist striving to give the best care to her patients. However, if she had never entered either field, her course would’ve taken a different turn that brought her into restaurants.

“I would have definitely done something that involved customer service. If I never got into the medical field, I’d probably be a restaurant manager. It was actually the road that I was on, but decided to get out of it,” Hatch said.

On the other hand, as a young girl she imagined her life still in the medical field. Except her career choice would’ve excluded the excitement of emergency calls and the rush of rescuing a patient’s life.

”I wanted to be a psychologist, specifically for children. When I first started college after high school, that was my goal. It’s funny because my son didn’t know that about me but he wants to become a psychiatrist,” Hatch said.

Furthermore, deciding to work in a hospital has caused her to believe in unusual things others may not. Bizarre situations and settings have altered her thoughts about the paranormal.

“I absolutely do believe in the supernatural. I don’t believe in Bigfoot because I think he would’ve been spotted quite some time ago, but I do believe in ghosts. I’ve actually heard of people in the hospital who have seen ghosts. The first time one of my patients spoke after he was able to, he kept pointing to the corner of the room. We thought he wanted to get out of the bed, but as soon as he could talk the first thing he said was ‘ghost,’” Hatch said.

Hatch is a woman of varied interests and beliefs; some shocking, others fascinating and a few amusing. Nonetheless, she is still ready to teach the students and is looking forward to her first year and the ones to come.

“The moments of clarity I’ll witness are what I’m looking forward to as well as changing things up in the classroom due to short attention spans. I love that you guys chose to learn here. This school is amazing and I am very proud to be a part of it now,” Hatch said.