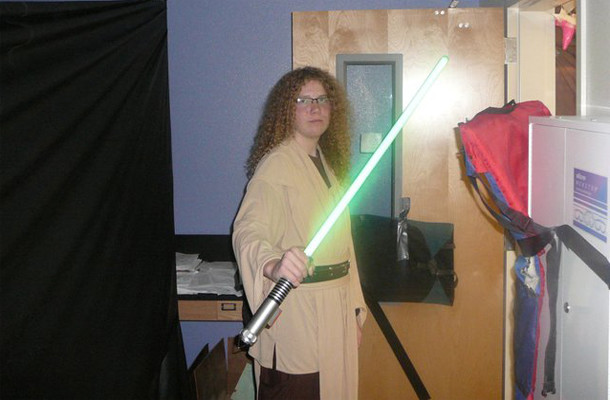 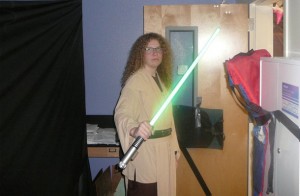 For as long as he can remember, junior Alexander Soukup has been an avid fan of the Star Wars franchise. His favorite character is a toss-up between Luke Skywalker, Qui-Gon Jinn, and Boba Fett. His first memory regarding the sci-fi series was playing with toy lightsabers as a young child while wearing an over-sized Star Wars t-shirt. Ever since, he has continued to show a very unique interest in the movies and the universe built around them.

He attends many conventions, primarily special events corresponding to anniversaries of the movies, like the 30th anniversary of “Star Wars: Episode 5” a few years back. During lunchtimes, he’s been seen in the middle of “lightsaber duels” with other students, playfully pretending to fight with the use of lightsabers.

“A duel can be started simply by withdrawing, or ‘lighting’, your lightsaber. If there’s another fan around, they may step up and withdraw their own and you can start. Up to five different people have approached me this way at conventions,” Soukup explains.

Soukup’s expression of his fandom, whether it’s a pair of lightsabers on his belt, a Yoda backpack, or outright dressing as a Jedi on several occasions, has earned him a reputation school-wide. He personally describes himself as “quirky” and “unafraid to express [himself]”, but also is rather empathetic and analytical of people.

While he’s showcased his Star Wars merchandise at school, he can’t bring all of it; at home his family shares a “game room” decorated with posters of all six movies and model ships hanging from the ceiling. Some of his most prized possessions include three replica lightsabers used for shows–appearing closer to how they do in the films.

Besides his knowledge of the films, Soukup knows plenty about the extended Star Wars universe, but admits he is not too knowledgeable of the books. He pursues necessary information from the online Star Wars encyclopedia, “Wookiepedia.” He also enjoys playing the numerous video games produced by LucasArts, a game development company known for Star Wars games.

“While my Nintendo games are pretty varied, most of my Xbox games are Star Wars games,” says Soukup. As a video game design student, Soukup hopes to execute what he learns here at SWCTA later on in his future career. His dream is to work at LucasArts. He would also enjoy expanding the Star Wars universe himself, and aspires to work personally with George Lucas, the creator of Star Wars.

Lucas has become a prominent figure in “nerd culture”, and is something of an idol to Soukup. If he were to meet Lucas, Soukup would try to remain professional and express his appreciation, but claims “I probably wouldn’t be able to help geeking out.”

IN MY EYES: SEBASTIAN HERNANDEZ

Soukup doesn’t have much of an opinion regarding other popular science fiction series, such as Star Trek, Doctor Who, or Firefly. He tries to avoid the stereotype of “anti-Star Trek/Star Wars fan”, and describes himself as “more of a defender of what I like, rather than an attacker on what others do.”

In response to his reputation here at SWCTA, Soukup finds it nice to be recognized but worries that it may be all he’s remembered for.

“People think it’s all that I think about, which isn’t true,” says Soukup

Unashamed of his odd demeanor, Soukup is a very interesting character, especially to who he talks to. The fact that even people who don’t have classes with him, even in different academies, have noticed him somehow definitely says something about him.