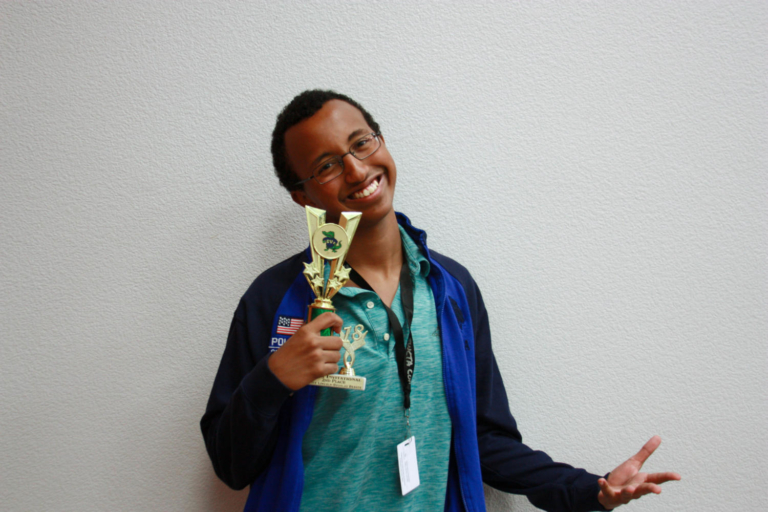 Posing for a photo, Ahmed proudly shows off his first place trophy. "I like telling people what I think and commanding attention from the audience," Ahmed said. "Forcing people to listen to me is appealing." Photo Credit: McKenna Thayer

Lights shine on the podium as tension rises. Freshman Ahmed Ahmed looks at his peers and waits anxiously for the results of his match to be announced. As it comes down to the final two debaters, Ahmed holds his head high.

Last Saturday, Ahmed took part in the Lincoln Douglas debate at Green Valley High School. His debate topic was whether or not civil disobedience in a democracy is morally justified.

“I’ll admit my fourth debate was really hard and I came insanely close to losing and I had a bad judge on my second round,” Ahmed said. “I struggled the most with trying to keep my opponents engaged.”

Despite being his first year in speech and debate, Ahmed felt confident from the beginning. With no prior debate experience, Ahmed received help from his adviser Mr. Henry Castillo and teammates.

“I love teaching and educating people and inside Ahmed has something special; he has the ability to craft amazing cases and I’m glad I was apart of his growth in the world of speech and debate,” junior Ignacio Parra Parra said. “He’s already won a trophy for our school and I’m sure he will bring many more.”

With advice from his teammates, Ahmed was able to make adjustments to his arguments. He believes this was a big part of what led him to success.

“I ended up getting first place, becoming our school’s first Lincoln Douglas debate champion,” Ahmed said. “I’m not surprised I won, I would actually say I was a favorite from the beginning.”

With an interest in moral issues, Ahmed plans on being a civil rights lawyer. He believes that speech and debate will help him in his upcoming career.

“Ahmed’s work ethic is outstanding,” Mr. Castillo said. “His effort in debates is what I expect to see in seniors; I see immense potential in Ahmed and I know his work ethic will rub off on others. Our team greatly benefits from his contributions.”

Ahmed plans on competing in an Oratory debate in late November. He hopes to continue winning trophies and inspire new members in the coming years.

“Whenever I feel down or stressed I think, man, I’m a Lincoln Douglas debate champion,” Ahmed said. “I’d tell other students to do their best in whatever their passion is, because the sensation of victory is like no other.”