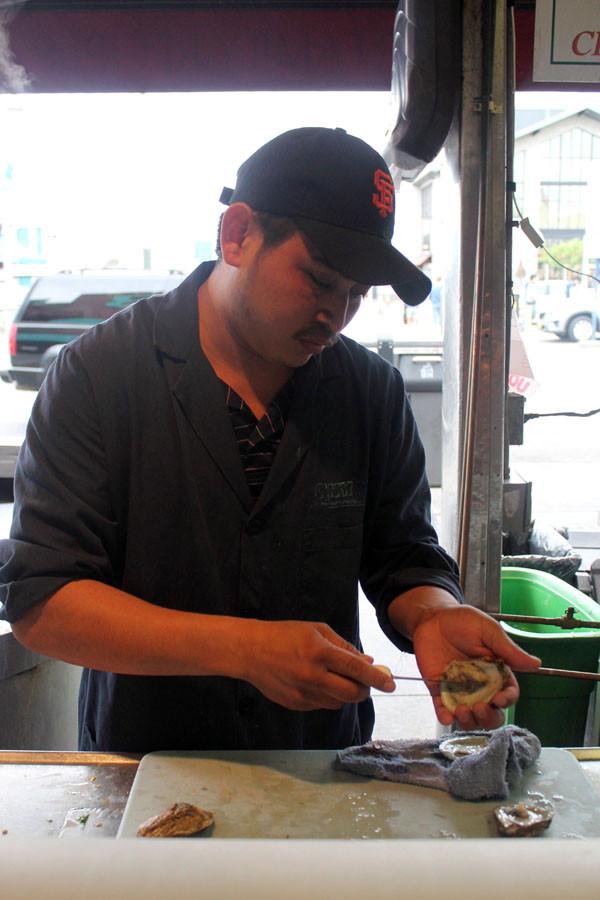 With a “Lobster Carlitos” in hand, apprentice chef  Luis Dzum entertained tourists and locals that passed by seafood restaurant, Nick’s Lighthouse on 2815 Taylor Street, San Francisco, CA. Lobsters are used as an object of propaganda to intrigue customers to eat at the restaurant.

Everyday, for 11 years, Dzum stands in front of the restaurant with a new lobster to lure in bystanders. Many tourists decide to take pictures with the lobster or with Dzum and the lobster, also enjoying the various forms of entertainment presented outside of the restaurant. Eventually they decide to dine in either buying a crab, lobster, or seafood soup.

“Everyone says “I want your picture”, but I don’t mind because it makes me feel like some kind of superstar! But lobsters like Carlito is the key to bringing in customers,” Dzum said.

Dzum works under the supervision of Executive Chef Javier Varela who has been employed at Nick’s Lighthouse for over 21 years. At the age of 17, Varela washed dishes for the restaurant and climbed the ladder of success becoming the Executive Chef.

Varela creates his own recipes, making Nick’s Lighthouse famous for its originality. The restaurant opened in 1934 and specializes in fresh steamed crab, seafood cocktails, chowder and shrimp salad sandwiches.

“I love my job, you have to like what you’re doing to enjoy it. I’m in charge of making all the recipes and tasting them before I sell them,” Varela said.

Nick’s Lighthouse employees work together with such harmony that no one ever questions their abilities to please visitors.

Sure enough, the morning lobster shows always cause a spark of interest among fellow locals, tourists, or bystanders.

“My favorite part about working in the kitchen is learning

The following story was produced during the 2013 JEA/NSPA Journalism Conference.