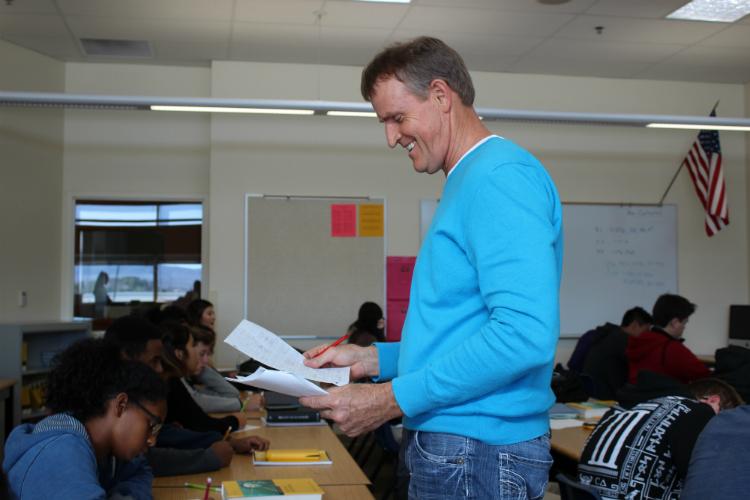 Checking homework for his Pre-Calculus Honors class is Mr. Rodric J. Hersha. Besides being a golfer and basketball player, Hersha is a devoted math teacher. "I love having him as a math teacher because he presents concepts in a way that is easy for the class to understand while also answering everyone's questions and being funny," junior Samrawit Misiker said. Photo Credit: Tyler Antonio

He steps forward onto the stage, aglow with bright white lights. He stares out into the crowd of smiling faces, his own smile beaming back at the sea of attendees. He eagerly takes hold of his award and turns toward the audience to give his thanks.

Meet Advanced Placement (AP) Calculus and Pre-Calculus teacher Mr. Rodric J. Hersha. He has been heavily involved in both basketball and golf for decades, including his accomplishments made in Ohio as a basketball league leading scorer, all-district coach, district coach of the year and Division 2 State Coach of the Year, eventually resulting in him earning a spot in the Northwestern Ohio District Coaches Hall of Fame.

“Being inducted was a neat experience because it means that I have been around for a while and that I had some success, and it’s always fun to be recognized and look back over my coaching career and do something that’s worth remembering,” Hersha said.

Throughout the last 48 years of golfing and 35 years of playing basketball, Hersha has learned about people and competing.

“I’ve always liked sports and enjoyed playing and competition. By the time I got to high school, basketball was my favorite sport and then golf was my second favorite but I’ve always been interested in playing sports my entire life from when I was a kid and as I got older,” Hersha said.

As Hersha has grown older, golf has become his preferred sport. Although he still holds the memories from basketball, golf brings him greater relaxation.

“As a player, golf is a much more body-friendly sport than basketball. I used to be able to dunk fairly easy. Now, there is no way. I’m not as fast, not as quick, and I can’t jump as well. But with golf, I can hit the ball further now than when I was twenty-five,” Hersha said.

Along with being a math teacher, sports fanatic and coach, Hersha enjoys and prefers doing his best while performing under pressure.

“I am not an existentialist, but we all look for meaning in what we do. It gives me a greater sense of doing something that ‘matters’ if I can do it when it means the most. Inevitably that happens when the pressure is the greatest,” Hersha said.

He sees sports from a variety of angles and has gathered valuable practices that carry over to the rest of his life.

“When you coach, it makes you look at sports from different perspectives. I think you see it from a perspective as a fan and when you’re playing, so it’s an opportunity to work with different people and hopefully become a better communicator, but also gradually learn more empathy for people,” Hersha said.