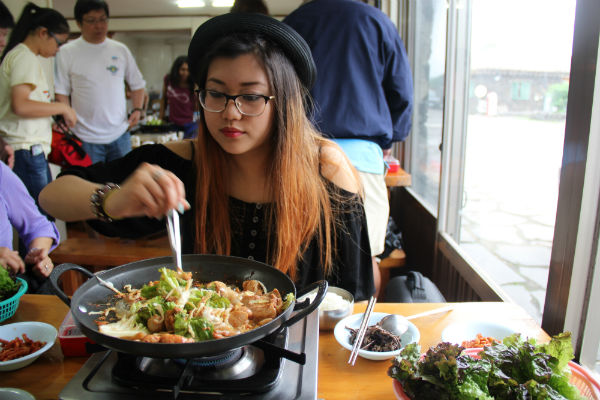 unior Tamara Navarro eats at a local restaurant in South Korea. She visited South Korea this past summer. "The food in South Korea was delicious. I'm already familiar with Korean cuisine, but to try authentic food was a completely different experience. The only downside is that now, the Korean food I eat here just isn't up to par anymore. For example the homemade Kimchi and the black haired pork just left me speechless, it was because of the freshness and the aesthetic preparation," Navarro said.
Photo Credit: Tamara Navarro

Standing right next to the demilitarized zone between South and North Korea in the midst of international tensions to visiting the Eiffel Tower in Paris, France, she has been around the world. Name a country, and she’s probably been there. Philippines, Canada, Mexico, Italy, Spain, you name it. She’s been up close and personal with peacocks and Korean pop stars in her travels.

Meet Tamara Navarro. She is not only the Editor-in-Chief of The Howl Yearbook, but has also been traveling since she was a toddler and shows no signs of stopping. Navarro believes that traveling is her way of experiencing and living life. To her, traveling opens up both her heart and mind.

Navarro started to travel when she was a toddler. She feels that traveling is in her DNA because both her parents are wanderlust, and instead of watching cartoons on Disney or Nickelodeon, she watched National Geographic, Animal Planet, and the Travel Channel. Traveling also helps her learn about different cultures, and broaden her sense that the world is bigger than it really is.

“It made me realize that I couldn’t really learn from my small corner of the Earth; Even at a young age I realized that to experience living, you’d have to step out of your comfort zone and I’d thank my parents for that, too. When you travel, I think it helps you realize that we’re all people, and just because something is taboo doesn’t mean you should shun it, but instead learn about it and respect it. Social acceptance is what I hope people strive for. The world is a big beautiful place, and I hope people realize that,” Navarro said.

Navarro has visited the Philippines, China, Thailand, Canada, Mexico, Hawaii, Spain, France, Belgium, the Channel Islands in Normandy Bay, Portugal, Italy, Japan, and South Korea. Her favorite travel destination out of all of them was South Korea.

“South Korea was definitely my favorite trip because it was one I helped in planning and the sightseeing was phenomenal because I was at an age that I could really appreciate everything I saw and learned,” Navarro said.

Though when she travels to see the big attractions, the little events that happen on the trip add depth. She has fond memories of helping an old lady in Italy and a Japanese man who helped her party get to the hotel.

“When I went to Italy I was visiting a Church of San Pio, there was this little old lady going down the stairs with heavy grocery bags all alone, and it looked like she was having a hard time. I ran over to her, took her bags, and held her arm to support her, and we went down the stairs together. Once we reached the first floor, she held my face with her hands and kissed my cheeks saying, ‘Grazzi.’” Navarro said.

Other than traveling, Navarro does karate, which she has been doing for four years, and is a third level brown belt. She wanted to do karate to stay fit and was  influenced by her dad, who has a third degree black belt in Aikido. Navarro also wanted to prove people wrong about girls not being able to fight.

“I wanted to get more fit and learn how to defend myself, so I wanted to take a martial arts course. My dad also influenced me since he’s a third degree black belt in Aikido. I was also annoyed with the whole notion that girls can’t fight or are not strong, so I practice karate to prove that wrong,” Navarro said.

Though she learns karate to defend herself, she still gets worried about being harassed. However, she does hope that girls learn how to defend themselves.

“Even if I might know how to defend myself, I still get worried at being harassed. Society still hasn’t developed enough to fully condemn actions of harassment whether to male or female. Girls have to learn how to defend themselves because we are constantly in danger of being victims to predators or to people who just don’t know how to contain themselves,” Navarro said.