Most experienced teacher in the district: Meet Mr. John Perri 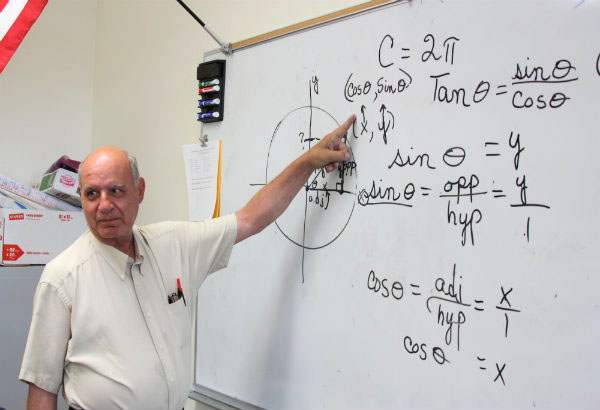 Marking the angles within a triangle is Mr. John Perri. Perri has been teaching math classes for over 40 years. “I have had a lot of wonderful experiences and students who have become very successful so I feel a sense of accomplishment for having had an influence on their lives,” Perri said.
Photo Credit: Alexis Drevetzki

From seeing students achieve their greatest success to witnessing students in their academic downfall, teachers see it all. Especially the ones that have been in the game for 46 years.

Meet Mr. John Perri, Algebra II Honors and College Prep Math teacher. He has been teaching for over four decades and hopes to continue until he reaches the fifth.

“I want to reach 50 years and will retire afterward, so that means 4 more years,” Perri said.

Perri’s teaching adventures began at Western High School in 1969, which was once the most prestigious school in the Clark County School District (CCSD).

“I began teaching at Western High School which was similar to Southwest because it was the top school in the district,” Perri said.

Perri did not always envision himself as a teacher, though. His career goal began in engineering, but eventually landed him in front of a chalk board.

“My goal would have been electrical engineering. The job market I would have graduated into was full and there weren’t many opportunities in that field, so that’s why I switched to teaching. As the years passed, teaching became important to me so that’s why I didn’t pursue another career. I saw value in staying and being a teacher,” Perri said.

Furthermore, Perri’s decision to pursue teaching has gained him a prestigious position on the CCSD seniority list.

“I’ve worked hard to be where I am and my goal is to be number one. The 14 ahead of me are not teachers, so technically I am the number one in terms of seniority amongst teachers,” Perri said.

Due to being in the education field for so long, Perri was able to teach students that have now become teachers themselves.

“He was a brand new teacher when I was in high school. We were so young and naive that we did not think to ask how old a teacher was; we didn’t even realize there was a huge age difference. We just saw a tie and trousers and thought they were much older, unlike how it is now,” Spanish instructor Ms. Geri Barnish said.

Perri also impacts his current students in a way that makes them feel “teacher” is more than just a job title.

“He has the heart that a lot of teachers don’t have. I feel comfortable walking into his class and knowing he wants to be there for the students,” junior Joey Harvanek said.

Additionally, his years in education have allowed him to witness the shift in teaching styles from 1969 to 2015.

“In the early days, the teaching style was direct instruction. Now, teachers teach so that not only do I do direct teaching about concepts, but also take further steps where students can use the concepts in the real world and get a better understanding,” Perri said.

Through 46 years of teaching, Perri has had much to experience; including witnessing his students become successful members of society.

“I’ve had a great number of students who have won awards in math and science and have gone on to occupy high level professions like dentists and lawyers. I have a couple of students from 1977 that went on to become the top two forensic chemists for Las Vegas Metropolitan CSI,” Perri said.

Along with years of experience, Perri has accumulated many joyous memories through providing education to young minds.

“Being a positive influence on students and being part of a cooperative team of math teachers brings me the most joy. I have no regrets because over the years I’ve seen the impact I’ve had on students and that’s a self fulfilling enjoyment,” Perri said.