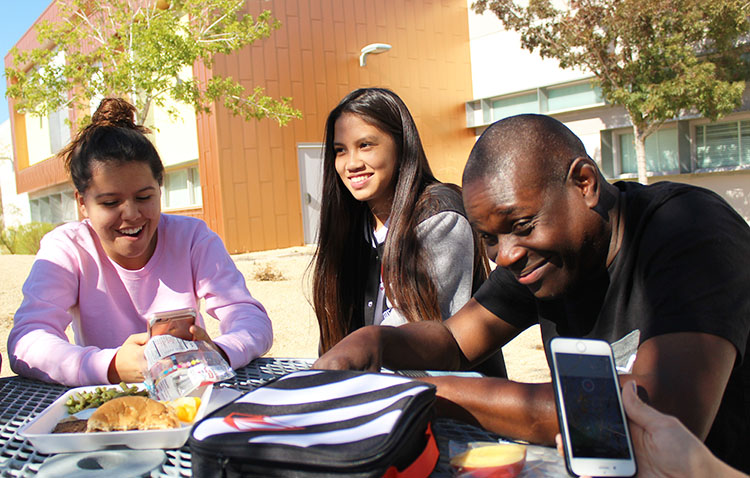 He thought back on his home. The warm, tropical air. The welcoming people. The sense of belonging. Then he thought towards his future. The possibilities. The job opportunity right in front of him. The potential to start something new.

Entering his eighth year as a campus monitor, Menses Fritz got the job on a whim. A couple of years ago, while he was visiting from Boston, Mass., he applied for a job at the CCSD building after a friend alerted him that the district was hiring.

“When I was about to walk away and go back to Boston, a lady from Miley Achievement Center asked if I would stay and be interviewed,” Fritz said. “I said sure and ended up moving here, even though I was just visiting.”

Prior to living in Boston, Fritz lived near the warm, sandy beaches of Haiti with his brother, sister and parents.

“I remember the beautiful ocean, the tourists, the free lifestyle, the nice weather,” Fritz said. “I used to live five minutes from the ocean.”

However, when Fritz was seven, Haiti experienced a tragic natural disaster, devastating the land and the people living there. This hurricane changed his and his family’s lives.

“Our roof got blown open from the strong winds and we ended up losing our house,” Fritz said.

Like many fellow Haitians, the Fritz family lost a majority of their belongings after the hurricane swept their house away. When he was seven, his parents moved to the U.S., and for the next two years he lived with his grandma before joining his parents in America.

“The hurricane is why my family had to move,” Fritz said. “First my parents moved to the United States; my mom went to New York and my dad went to Boston.”

Fritz arrived to his new home in Boston to live with his dad.

“I didn’t like Boston at first because I was coming from a tropical place to a very cold place,” Fritz said. “That was a tough situation for me to get adjusted to.”

Adjusting was not easy for Fritz. The food, the people, the school system, the atmosphere; all these things made it hard for him to get accustomed to his new home.

“Moving to Boston was different because the people on the east coast are so fast paced compared to the free spirited people of Haiti,” Fritz said.

When Fritz came to the United States, he didn’t know how to speak any English. His native language is French.

“It was hard to make friends at first because the people make fun of you because you don’t speak the language and you sound different,” Fritz said.

A major cultural difference that Fritz had to deal with other than language was the food. It took him about six months to adjust his palette to the American flavors.

“On the island we mostly ate rice and beans, plantains, pork, fresh fish, crab and chicken,” Fritz said. “I didn’t like it at first, but I got used to it after a while.”

Despite moving at a young age, Fritz still regularly visits his family and friends remaining on the island.

“I usually go back home for part of the summer,” Fritz said. “I visit friends and family in Haiti, but also in Florida.”

Because he was so young when he moved from his home country, and he doesn’t favor the cold weather in Boston, Fritz doesn’t think he will be moving from the west coast any time soon.

“Number one, I wouldn’t want to go back to the cold weather in Boston,” Fritz said. “Number two for why I want to stay on the west coast, I was so young when I left Haiti that I don’t remember much, and so I have most of my life and friends here.”