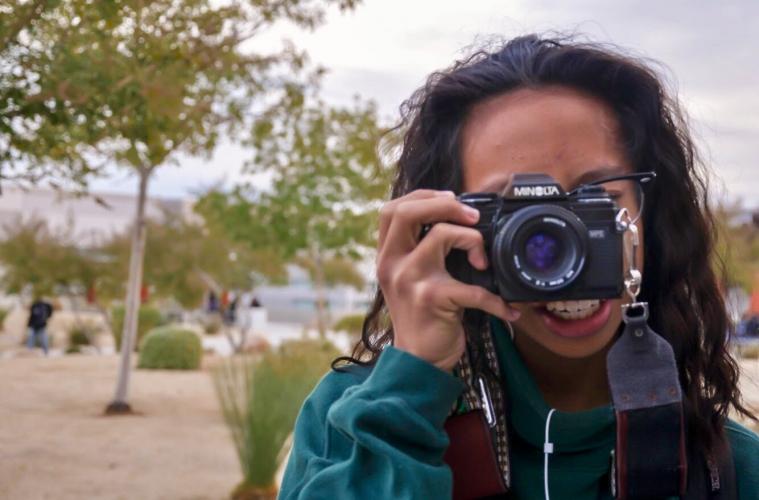 Capturing his life through film, sophomore David Paleracio takes photos of activities happening at school. Paleracio has been taking photos of his daily life and travels since the start of his sophomore year. "I bring my camera everywhere I go so I don't miss out on the perfect moment to take a picture," Paleracio said. Photo Credit: Kyle Bayudan

Reeling in the film. Advancing the exposures. Setting the focus. Sophomore David Paleracio configures his camera to take a picture. Wind blowing through his hair and the sun painting an orange glow on the surrounding environment, Paleracio frames his next shot. The subtle clicking sound when the camera takes a picture signals him to start again.

Cruising down the street on his skateboard, Paleracio is intrigued by the surrounding environment, prompting him to stop and take picture. Being an avid street skater, he is influenced by professionals Dale Decker and Curren Caples who both take photos using film.

“Since I usually skate on the street, I go to places like the tops of buildings I pass by and alleyways with graffiti,” Paleracio said. “I take pictures at those spots because I feel those are places people don’t usually want to go to and are exclusive to people who like to adventure.”

Although Paleracio has only been shooting on film for a short while, his passion for the art has been growing ever since the start of his sophomore year.

“I feel that I’m attached to [film photography] because of how it looks; the slight graininess and how the colors look are appealing to me,” Paleracio said. “The process of getting it developed and seeing your pictures for the first time adds to the overall experience of film photography.”

Often traveling around the city, Paleracio brings his camera with him everywhere he goes so he doesn’t miss out on an opportunity to capture a moment of his day. As he skates around neighborhoods, tunnels and run-down buildings, Paleracio captures amusing moments of people interacting with one another and the landscape of certain areas. Just about anything he finds eye-catching he will take a picture of.

Despite the short amount of time Paleracio has been shooting on film, he feels that he is  progressing each time he picks up his camera.

“When he first started taking pictures, I thought he wouldn’t be as good as he is now because he was really only into skating,” sophomore Raymond Vitella said. “The more and more he took pictures, he got better and found a way to balance both of his hobbies — skating and photography.”

Shooting on a film camera as opposed to a digital one allows Paleracio to have one unique photo that’s exclusive to himself. He enjoys the development process after taking the pictures and the element of surprise once he receives the prints.

“A developed photo from a film camera, to me holds more purpose than having tons of digital copies which you probably only end up looking at once or twice,” Paleracio said. “While film may be outdated, it still has its uses and it looks different than digitally composed pictures because of the slightly washed-out colors and how aesthetically pleasing it is to the eye.