On a fitness journey: Meet Dominic Lepore He has currently lost a total of 70 lbs. 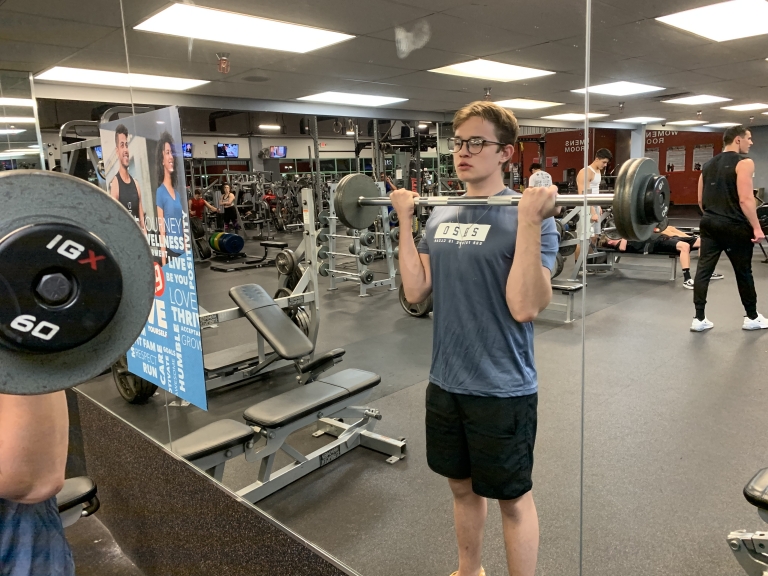 While working out at the gym, senior Dominic Lepore curls a barbell. “My favorite workout to do is probably curls,” Lepore said. “By doing those in a certain amount of sets and different weights, it gets your biceps bigger so your arms look big.”

Weights slamming on the floor, adrenaline running through his veins. Sweat dripping down his face, his arms shake as he struggles to make the rep.

From a young age, senior Dominic Lepore noticed he was bigger than his peers. He felt different from other students after getting made fun of in middle school for his weight.

“When I was younger I would eat a lot of unhealthy foods at big portions,” Lepore said. “I would just sit around all day and do nothing except for watching television and occasionally homework and chores.”

In eighth grade, Lepore was tasked with choosing a PE class for his zoned school. After being worried he wouldn’t be able to perform the tasks given in class, he convinced his mom to get him a gym membership.

“After I found out I got into Southwest, I decided that even though I wouldn’t be in the cross-fit class, I would still go to the gym,” Lepore said. “I started by working out three times a week and I would just use the machines that would interest me the most.”

Besides using machines, Lepore learned how to use free-standing weights and other methods to becoming physically fit.

“Every single time I go to the gym I do some form of cardio whether that be the stairclimber, treadmill, stationary bike or rowing machines,” Lepore said. “Doing workouts like these get your heart pumping and burns a lot of calories.

After a few months, Lepore noticed weight loss however, he wanted to see new results.

“I started working out and seeing a little bit of progress and then by my junior year I had lost 70 pounds,” Lepore said. “I felt too skinny during my junior year so I decided to eat more protein and get bigger.”

Now comfortable with cardio and high intensity workouts, Lepore has advanced to weight lifting. Now that he has made his weight loss goal, he is now working towards adding muscle mass.

“When I first started weight lifting, it took me a while to get used to the new techniques I had to use,” Lepore said. “Weightlifting is a whole different category of exercise and is unlike anything else I had ever tried.”

Although Lepore doesn’t follow a strict diet, he does believe that a poor diet will hold a person back from seeing results.

“They key is keeping serving sizes in mind, eating mostly protein, and get some carbs and fats in there as well,” Lepore said. “By doing all of those it allows you to become more healthy and slim down.”

At the age of 16, Lepore started working with a personal trainer. He would visit his trainer once a week for one hour.

“My trainer would give me personalized workouts to do on my own which helped me progress a lot in my journey,” Lepore said. “A few months ago, my trainer joined the Physical Therapy program at UNLV, so he was unable to train me any longer. When I workout now, I use some of the workouts he gave me and I incorporate them into the workout plans I make for myself.”

In the future, Lepore plans to implement workouts into his everyday life and maintain his fitness routine.

“I’ve seen myself develop mentally because I realized that if you really work hard for something and commit to it, anything is possible,” Lepore said.