One more episode, is it worth it? 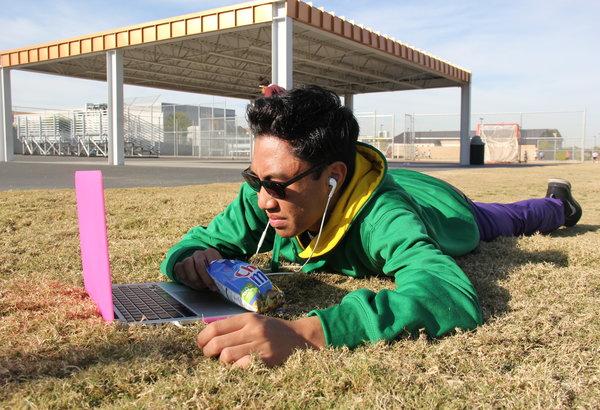 The laptop sits in front of you with Netflix on the screen, it asks the question, “Are you still watching?” It is Monday, 8 p.m. and you have an essay that is due first hour in the morning. “Just one more episode,” you say, and that last episode you are supposed to watch is not really the last episode. What is meant to only be the last hour-long episode, quickly turns into a five-hour marathon.

Having those extensive marathons of watching your favorite show for copious hours is considered binge watching. Binge watching is like binge eating, but instead of food, a person watches a show for hours on end.

“I binge watch TV shows once a week. I can binge watch a show for six hours, but I do take breaks,” sophomore Janine Soria said.

Binge watching can have serious ramifications on physical health. In an NBC news article, Lilian Cheung of the Harvard School of Public Health states that “the more television people watch, the more likely they are to gain weight or become overweight or obese.”

Cheung continues to state that “there’s emerging evidence that too much TV watching also increases the risk of weight-related chronic diseases, such as Type 2 diabetes.”

This is primarily because the viewer does not exercise as often, but could be sitting idly on the couch watching the show.

“I think the correlation of binge watching and becoming obese is scary. Personally, I marathon a lot on the weekends on Hulu and Netflix to get caught up with the hype of the shows. To see that something that I love to do, especially in the winter, has negative health effects is honestly very frightening,” sophomore Amatullah Aman said.

In addition to physical health, having these viewing marathons can have an impact on one’s mental health. In an article on the Huffington Post, Robert F. Potter, Ph.D, the director of the Institute for Communication Research at Indiana University, says that your emotions at the end of a show is affected from when you first queued the show. For example, viewers of The Walking Dead may begin the show with excitement, but end the season with tear stained cheeks.

“Korean dramas always affect my emotions, especially when I watched Angel Eyes. I couldn’t stop crying and literally spent so many nights thinking about all the traumatic problems the characters had to go through,” junior Marissa Villarosa said.

Continuously watching a show can cause a person to develop insomnia, a disorder in which an individual has difficulty sleeping. Developing insomnia, however, is just like any addictive behavior to drugs or alcohol.

“I suppose binge watching helped develop my insomnia. Staying up at night for hours on end probably led to my insomnia,” Villarosa said.

One of the most frequently binged genres among the student body is anime. Anime is a style of Japanese film and television animation. Though it may be different from the traditional American live-action shows, the antagonistic effects on the body still remain.

“I watch anime everyday, and I binge watch every weekend. I can watch for three to four hours straight, or three-four hours with a break in between. However it does not affect my academics and social life. When it comes to the effects on my body, I’m not really affected. I can go to sleep easily at night, and exercise continuously,” sophomore Noel Chang said.

There are ways to stop the seemingly unstoppable juggernaut of binge watching. After watching an hour-long episode, try only watching 20 minutes of the next episode. The first 20 minutes should resolve the ending of the previous episode, but does not dive into the storyline of the current episode. Another way is to stop halfway or three-quarters of the way through the episode. Though it does seem nonsensical to stop there, the halfway point of a show is where there is a break in story progression. Therefore, you would stop before a new storyline is presented.

“Binge watching consumes most of my free time. I marathon all my shows like ‘Top Gear’ and ‘LOST’. It has helped me get over emotional problems and escape reality. It helps me sleep, knowing I finished the show. My body might be a little sore, but it’s worth it. However, I believe that doing this should be kept in moderation. You should limit yourself to binging once or twice a month,” junior Makaio Wakeley said.