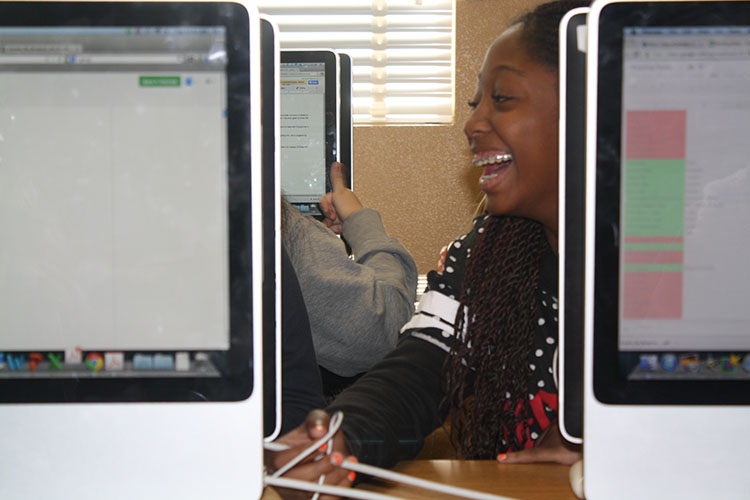 Freshman Kelis Henderson is an actress who has a chronic disease, sickle cell anemia. Since Henderson has this disease she has to go to the hematologist almost every week and to the hospital quite often. "I only have to go to the hematologist when in pain or to get a check up after hospital visits. That impacts my life because I have to miss out on a lot of things because of my disease, such as going outside when it's cold or being out too long because of ankle and knee pain. I feel kind of lost when I come back to school because I'm usually the only one who doesn't know what to do," Henderson said.

All eyes are on the girl in the spotlight, watching as she walks across the stage. She recites the words of the play with a calm and steady voice. Light blue dress, shiny black hair and a smile on her face is what the crowd sees.

Once the curtain closes, however, freshman Kelis Henderson is hit with a huge pain. Having to go to the hospital every week and taking pills on a daily basis is difficult, but she does not let sickle cell anemia stop her from doing what she loves.

“I’ve learned to live with and accept that I have a disorder that makes me different. Acting is something that I can do and it makes me happy because I feel like I belong and fit in,” Henderson said.

Sickle cell anemia is an inherited disease where disk-shaped cells turn into a sickle shape and blocks blood flow, which causes pain. Henderson is required to carry Ibuprofen with her for the swelling and discomfort.

“Having sickle cell is really hard because it’s constant pain, being poked and prodded. It makes my daily life harder to be active and keep up with everyone else,” Henderson said. “I have to go to the hematologist almost every week to make sure everything is okay because sickle cell affects all body systems.”

For the rest of her life Henderson will have to live with this chronic pain. For her mom, the most difficult part of having a child living with sickle cell is how the disease impacts her child.

“Sometimes it’s very difficult knowing that your child is in unbearable pain and there’s nothing you can do about it; knowing that you have a child that is unable to do any sports no matter how hard she tries,” Jennine Henderson, Kelis’ mother, said. “ I am so thankful that she always puts 110% into everything she does.”

Henderson’s dream is to become a famous actress, one that everyone will know. Henderson has starred in “A Christmas Carol” as the Ghost of Christmas Past and in “Cinderella” as Cinderella.

“I’m not letting [sickle-cell] get in the way of me becoming an actress. Knowing that I have to try twice as hard will make being an A-list actress so much better,” Henderson said.

“Being a major part of the play made me feel a little nervous but also really good at the same time because I was actually chosen for a main part over everyone else. On the stage, I feel like I actually belong and that I’m not that different from everyone else,” she said.

Henderson continues to act even though she can have a flare-up caused by stress at any moment of the day. For those rehearsal days, she must stay calm in order to avoid a sickle cell attack. However, she won’t let sickle cell keep her from living her dream.

“I love when Kelis acts because it makes her happy and it makes me so proud of her. She was in a couple of little kid plays when she was three and four years old, and she would always be reciting things she heard on TV,” Jennine Henderson said.

While Henderson has many interests, acting will continue to have an important place in her life. For now, she is dealing with her disease one day at a time.

“I’m not letting [sickle-cell] get in the way of me becoming an actress. Knowing that I have to try twice as hard will make being an A-list actress so much better,” Henderson said.