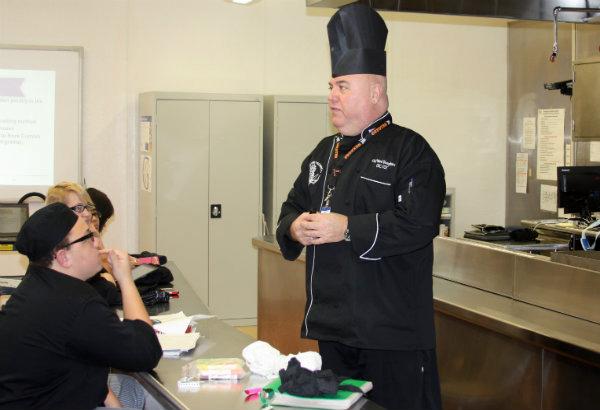 Showing a powerpoint on the art of cooking a chicken is Chef Ward Daughters. Daughters has been a teacher for the past seven years. "As a chef and instructor he is experienced and explains things clearly. He's a great addition to the culinary team," sophomore Emjhay Morales said.
Photo Credit: Alexis Drevetzki

Meet Chef Ward Daughters, the newest culinary teacher. He has spent the last 40 years extending his knowledge in the culinary arts and is now hoping to share that knowledge with his students.

Daughters’ career began in New Mexico in a small restaurant named The Palace, where he learned the basics of cooking working in the kitchen.

“I’m from Santa Fe, New Mexico, where I began my career doing a classic apprenticeship for a fine French restaurant in the city, because Santa Fe is all about food. I decided to go to the Culinary Institute of America after meeting a chef from there. I spent two years there and got my Associates in Liberal Studies degree,” Daughters said.

Promptly, his career began to flourish. Daughters was given the opportunity to travel all over the West, preparing new and exciting dishes and enhancing his culinary skills.

“After that, I wanted to travel. I wanted to get out and try my skills, I wanted to use them. I travelled all around; New Mexico, Colorado, Arizona, Hawaii and California. I eventually ended up here in Las Vegas in 1992, where I started off at the Hacienda,” Daughters said.

[vision_pullquote style=”1″ align=””] I wanted to travel. I wanted to get out and try my skills, I wanted to use them. I travelled all around. – Chef Daughters [/vision_pullquote]Hopping from hotel to hotel, Daughters climbed the ranks in the kitchen and gained expertise in several different restaurant settings and styles, such as steakhouses, buffets, French, German, Chinese and more.

“I became the assistant executive chef at Harrah’s, and moved up to executive chef. As a chef you always want to grow, so I had an opportunity at the Sahara Hotel. I only stayed there for a little while before I went back to Harrah’s, but was stolen away to open up the Reserve. I went there as the executive chef, and stayed for a couple of years before I was stolen away again by Boyd Gaming and went to Main Street Station. I stayed there [Main Street Station] for nine years. Loved it,” Daughters said.

In spite of his career continually expanding, he had to make the decision of returning home to tend to his parents, opting to take a step away from the rush of the kitchen and into education.

“My parents got older and it was time for me to go take care of them, so I couldn’t be the executive chef running five restaurants anymore, so I started teaching. I was lured away again by another company, Le Cordon Bleu Las Vegas, where I stayed for seven years. Many of the chefs there are trying to get into Clark County School District,” Daughters said.

Along the way, though, Daughters acquired several certifications in the world of fine cuisine.

“I am a certified executive chef and a certified culinary educator by the American Culinary Federation, as well as a certified barbecue judge by the Kansas City BBQ Society,” Daughters said.

Although he is no longer in charge of several restaurants and bustling around the kitchen to prepare meals, Daughters knows he could have never chosen another career. In his eyes, being a chef is what he was destined to become.

Additionally, Daughters has taught another chef many students may be familiar with; Culinary program leader Chef Ruben Munoz.

“When I was attending Le Cordon Bleu, he was my last instructor for a course called ‘Cuisines Around the World.’ One of the things about him is he has about 40 years experience so he’s very passionate about what he does. He brings an understanding to the kids about what needs to be done in the industry,” Munoz said.

Daughters has also experienced failures in the kitchen. One experience in particular stands out as being especially distressing.

“Trying to sell skate wing at a steakhouse 15 years ago to a clientele that did not know what skate wing was, was difficult. I could not give it away, but now it sells like crazy. Everybody knows what it is; all it is is stingray wing,” Daughters said.

Furthermore, Daughters feels he was given an exceptional opportunity when offered to teach here. He expects this year and those to come to be remarkable.

“I feel like I’m one of the lucky ones. I felt so lucky when Mr. Butler called me and said that I had this position. I have enjoyed education for seven years now and am able to teach these young students, which I could never possibly teach everything in four years that I’ve learned in 40, but I can try. So far, it’s been enjoyable. This is also going to give me a normal life. I look forward to this experience,” Daughters said.

Nevertheless, Daughters hopes his students will gain knowledge to deal with situations such as this, as well as consistently thinking and growing as chefs.

“Coming with his credentials and just the way he looks, I though that he would be a tough chef with a rough personality, but in reality, I was pleased. He has a personality that makes it fun to learn and it just seems like he wants the students to succeed,” senior Daee Kang said.