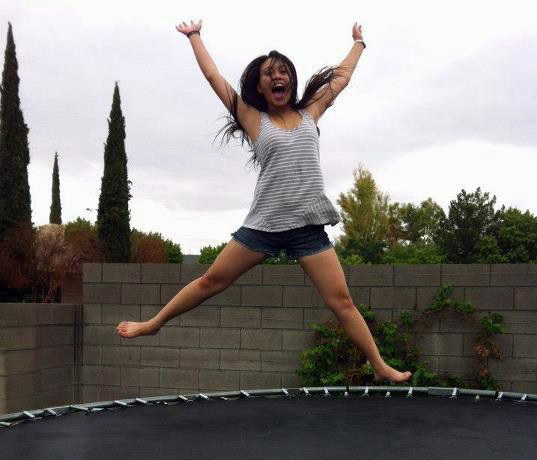 Ashley Tolentino jumps up as high as she can on a trampoline while bonding with other Sudent Council students.Photo Credit: Student Council

Q: Why did you run for class president?
A: “Running for class president wasn’t always what I had first intended to do. Since middle school, I thought of going for student body president or a club president, but I was honestly new to the ways of student council during my freshman year; that’s when I decided to just wait and learn from those who did have experience. Even if I had to leave student council for two years, I have learned a lot about “leadership skills.” Since I had put myself out there many more times than I think I had ever done before, I really wanted to give myself a chance of doing something that I think is way out of my comfort zone. And I did. I ran for class president knowing full well that I am there to represent the Senior Class of 2013, that I have even more responsibilities.”

Q: If you didn’t decide to run for class president, would you have run for other officer positions? If so, what positions?
A: “If I hadn’t ran for class president, I definitely would have ran for either the Secretary or Vice President position. I was a secretary before and vice president wasn’t that far from a president. But in the end, I wanted to run for President and challenge myself.”

Q: What do you plan on improving for our senior class?
A: “What I plan on improving for our senior class is our school spirit! There are a lot of other reasons I could have chosen for this question, but I think class spirit is what drives students to focus more on school issues. So most definitely our school spirit! I had noticed that a lot of times, our class do get involved with school events when given a “push.” So this year, if me and other class officers keep pushing for the seniors to get involved as much as they can before our high school life ends just to become more involved… then we will! I want to have the Senior Class of 2013 make an impression and for the school before we all leave and graduate.”

Q: How do you plan to make the year more memorable to seniors?
A: “Class spirit! It may seem like such a small thing, but class spirit can really hype up students and how they view their school. I want to keep bringing up things that relate to having school spirit, like our senior crowns and the numerous shirts we will have during this year. There are so many ways to have a memorable year and all it takes is to get the seniors up and moving with their enthusiasm about being SENIORS! For the events such as Senior Sunrise or Grad. Night, I want our class to be more united. Just like on Senior Sunrise, we want to play some games so that both academies can be together. It’s not academy versus academy, it would just be all of us playing together against one another. For the past few years, it’s always PA against DA, especially in our class, so it would be nicer to be all together for once.”

Q: How exactly are you the voice of the class?
A: “What the class does and what the class wants, they will come to us [senior class officers] about it because we’re the ones that make this happen. Like if they want to have a whole class fundraiser, and we would have to put it up there and ask the class advisor for approval. If the class has an opinion, we would just bring it out there and see if it’s a good idea or if we can combine it with another idea.”

Q: How would you resolve a problem where the class is arguing between two choices?
A: “Everyone thinks differently, and I know that there will be times where one academy will get frustrated with the other academy. But there will be kids from both academies who will think alike. If I did have to resolve a problem where the academy disagrees with each other strongly, I would have taken in as many reasons as to “why?” from each side and discuss it with the other class officers and class advisor. Or I would combine some important parts from both choices and make one big new choice. Either way, I will need to satisfy most of the class. One of the problems was the one over the senior shirts. For the t-shirt issue, because a lot of kids didn’t like the shirt, we were about to cancel it. But we decided not to because only a handful of kids didn’t want it. We continued on with selling it, and more than 50 kids actually did buy the shirts. The kids that were complaining, all that they wanted was a design that they voted for, so the only way to solve a problem like that is to tell them to stand up, submit a design, and vote. It has now been resolved, and for the next two senior shirts, they can submit their design and vote on which they want. ”

Q: Describe how well you work with the other class officers.
A: “The other class officers and I don’t seem to have any problems working with each other. At first, I was skeptical because we were all aware of who was who, but we didn’t know each other. However I wanted to stay on good terms with everyone so I made sure that whenever we had something to discuss, I would hear out everyone’s opinion. It was great! Everyone had an input and I’m glad that not everyone looked at me to always make a decision, instead we as a team made the decisions together. For the future, I want to keep the senior class officers as a TEAM. That’s the way it should be, because six heads are better than one, and I think that is what we all silently aim for—to work together this time.”

Q: Explain your experience at StuCo Retreat, and how it will benefit you this upcoming year.
A: “My experience for this year’s retreat was really great! Aside from the bugs, I can’t really complain about anything else. It may be hard to believe that in just three days, 40-something students of different ages were able to come together and have fun. But it did happen and I’m happy that it did because now, even when we all get frustrated with each other during school, we can remember those hilarious times where we “ripped up our cool card” and just had fun. I remember that we all had spent most of our free time down in the Recreation barn, even if we spread out into different areas, we still stayed in that barn playing with each other or watching the Olympics together. It felt like we were a happy, big family that took over Zion Ponderosa Ranch for the weekend.”

Q: What did you like best about your leader retreat? Least?
A: “This year’s Student Council Retreat was wonderful! The best thing about the retreat was that everyone had actually bonded within three days! What I liked the most about this retreat was that we didn’t have our phones 24/7. We were given our phones a few hours a day to contact our parents and get on our social media. It helped with getting to know each other and actually remembering every single person’s name! And since we didn’t have our phones, we only had each other to depend on and keep us entertained. It was great knowing that not having our phones was what kept me and the rest of the student council focused on what will be very important for the rest of this school year—each other. What I liked least about the retreat were the bugs! Since we were out in the woodsy part of Utah, a lot of the bugs were able to find a way and scare a lot of the girls. There were times when the bugs would end up taking a shower with us or sharing a bed with us.”