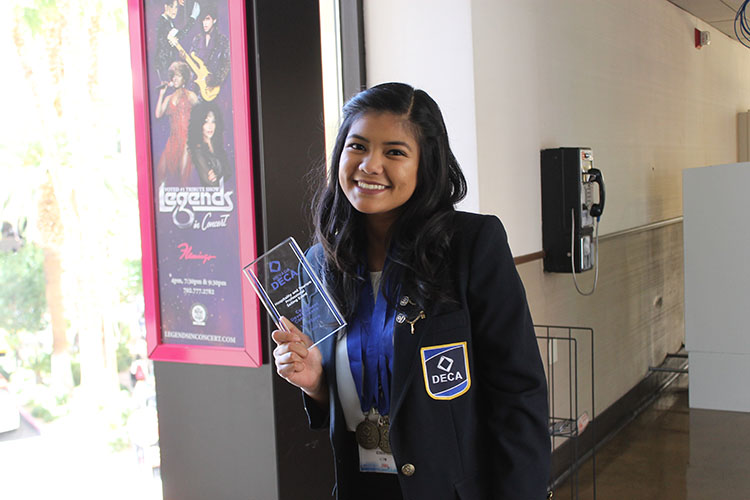 The lights flashed on stage while the music got louder by the second. Multiple students were on stage–among them is junior Kyla Bayani-Dominguez. She clenches her fist as she hopes to hear her name being called in the Hospitality and Tourism Professional Selling event. As the announcer states the third and second place winners, she holds her breath.

“And your first place champion from Southwest CTA … Kyla Bayani-Dominguez,” the announcer exclaimed. She could not believe her eyes–all the hard work she had done was worth it at the end.

Dominguez competed in an event that related back to her program area, Hospitality and Tourism. Her event focused on creating a travel itinerary for those who would be visiting Las Vegas.

“When I did my event, I was required to represent a destination management company,” Dominguez said. “I chose to do my event on Hello! Destination Management. For my project I went through the goals and values of the company so that the judge would know more about the management. Then I decided to incorporate the attributes the management had to show how it compares on a competitive edge.”

The Hospitality and Tourism Professional Selling event required participants to have three nights of entertainment and VIP airport transfers in their itinerary. Dominguez decided to focus the three nights into three categories for the guests: world famous dining, old school Vegas and the new part of Vegas.

“I decided to focus on these three days specifically because it would incorporate the historic part of Las Vegas as well as the new,” Dominguez said. “For example, the historic part would include more information on the Flamingo hotel as the new part of Las Vegas would focus on the Linq. Overall, the event had made my state experience the best one yet.”

Dominguez prepared for her event months prior to the competition. Her nights would often consist of editing, practicing and brainstorming new market strategies for her management.

“I strived high to make sure that I would have been able to get my pitch perfect,” Dominguez said. “Our DECA meetings would often help us prepare for state, so I always got feedback from the members when I presented my rough draft to them.”

Aside from the competitions that took place at the conference, DECA members were given the opportunity to go to workshops and sightsee around the hotel.

“What I really liked about state this year was that the workshops were very unique,” Dominguez said. “This year, Nevada DECA was able to host a talent show and everyone was able to participate. They gave away tons of prizes to the winners, and the workshops were always fun to attend. For the conferences I went to for DECA, this year had been one of the best with my chapter.”

Dominguez will participate at the International Career and Development Conference in Anaheim, California.

“I am excited to be attending ICDC,” Dominguez said. “It is one of the greatest events of DECA to participate in, and I can’t wait to show all my handwork at the international level.”