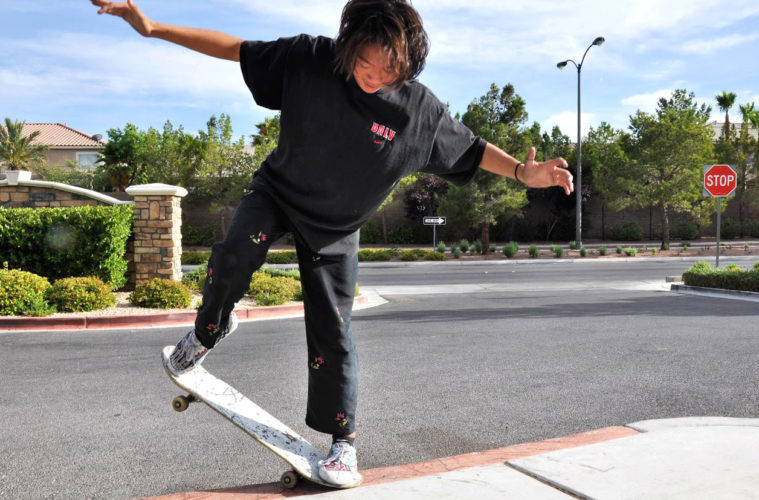 Surfing through the streets on his skateboard, sophomore Andy Khamsengmanivong manipulates his legs and feet to complete a 360 degree spin off the board. For the past few months, he has taken every opportunity to further improve his skills in street skating–a sport he has improved in. Khamsengmanivong receives inspiration from Jason Park and Aaron Kyro by watching their skating videos.

“I watch lots of tutorials and skate edits which are basically just videos of people showcasing their skills in skating,” Khamsengmanivong said. “I get influenced from those videos and from when I was living with my cousin who skated in San Diego.”

When Khamsengmanivong moved from San Diego to Las Vegas, he found motivation through sophomore David Lee–a friend he met in Spanish class.

“I met my friend David freshmen year and he skated with me every Friday, either at my house or his, until I learned and got down all the beginner tricks, ” Khamsengmanivong said. “He taught me all the basic street tricks and ever since then I’ve been teaching myself more difficult and intermediate tricks that catches the eye of people.”

From cruising the streets to riding through neighbors’ driveways, Khamsengmanivong flips and turns his skateboard wherever he goes. Khamsengmanivong likes skating on sidewalks, concrete ledges and out on the open road.

“I see Andy skating home from school everyday and I’ll see him try some tricks that make the skateboard flip in every way,” sophomore Amin Zamani said. “One day he did a kickflip, landed it and rode away like it was nothing, but another time he fell and I helped him up.”

A street skater has to be more mindful and creative with the space around them. As with park or vert skating, an individual uses the ramps and obstacles provided for the skater. Unlike freestyle skating, however, park skating and street skating rarely uses other obstacles during their performance.

“Vert and park skating limits you to do tricks that require ramps and other obstacles whereas on the street you can use anything to do tricks on,” Khamsengmanivong said. “The edge of a curb, a fire hydrant, or even a random pole sticking out of the ground can be used, you just have to know how to make use of the things around you.”

Street skating allows Khamsengmanivong to express his talents by displaying what he is best at. Skating provokes emotions within the rider and causes them to have a mindset focused on what they’re doing.

“Whenever I learn and actually land a trick, it makes me feel satisfied and happy because I put all the commitment and dedication into learning it,” Khamsengmanivong said. “It’s also my self-motivation to learn new tricks and be inspired by the culture of street skating and anything that has to do with it.”

The sport will always be deeply rooted in Khamsengmanivong even when he gets older. However, he sees his future self working in the business industry.

“I don’t know if I want to become professional because I know I will eventually have to get a job possibly in business like owning my own skate shop or even starting my own brand,” Khamsengmanivong said. “Street skating will always be a hobby of mine that I can progress in. It can act as a stress reliever, it’ll keep my mind off things and will keep me happy when I’m sad.”