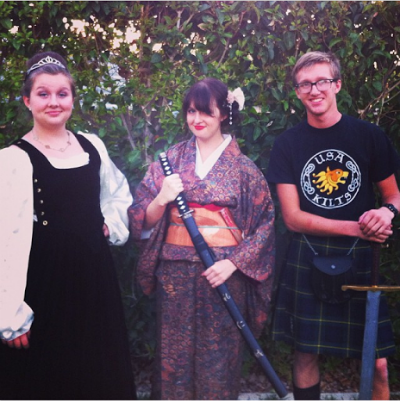 Tyler Long, Sophomore, and his siblings dress up in medieval theme. Long attends Renaissance festivals when he can to learn more about Scottish culture. "I am not afraid to wear a kilt in public and even my siblings are interested in doing it too."
Photo Credit: Tyler Long

Tyler Long is not an ordinary junior. He has a deep interest in Scottish culture and the Renaissance period of time, for he hasn’t stopped obsessing since he first discovered the culture. To further kindle his strong passionate love for the culture, Tyler frequently participates in Renaissance fairs and Highland Games.

Southwest Shadow: When were you inspired to learn more about the Scottish culture? And by who?

Tyler Long: I’ve always had an interest in the Scottish culture, but a real interest came when I worked at Camp Cherry Valley. We have the Highland Games there and it made me want to get more into it. CCV is a boy scout camp on Catalina Island, just off the coast of Los Angeles.

Shadow: What are the Highland Games?

TY: The Highland Games are Scottish events where you compete in different games such as tug of war, arm wrestling, indian rope game, haggis tossing, and more.

Shadow:  I know that you attended a Renaissance fair recently, was it your first one? Also, what is it?

TY: No, the first time I went to a Renaissance Fair was when I was about 11 years old. I went with my older sister who went with a group of friends dressed as the seven deadly sins. The Renaissance Fair is a large festival for the renaissance culture, but it is not limited to it. There’s also a lot of pirates and medieval people around.

Shadow: What were some activities that you took part in?

TY: I have done a lot of shopping, knife throwing, eating, and watching live jousting. I also wear a costume each year.

Shadow: What is considered a costume at these events?

TY: Costumes are any type of cosplay or dressing up in the theme. Some people were knights, wizards, and even wenches. It just depends on the costume you want to make.

Shadow: You said you did a lot of shopping, what were you looking for, and what did you find?

TY: There are tons of shops around, I was personally looking to buy a sword and I did. They also have shops for costume supplies, food vendors, handmade things that would have been around in this time period, and a plethora of other stuff.

Shadow: Explain knife throwing. Is it a game?

TY: There were three different knife throwing games. Throwing stars, throwing knives, and crescent knives. There was a large board with a painting of a classic pirate on it and you got points depending on where the stars or knife struck.

Shadow: What was your favorite part of it?

TY: My favorite part was watching the Knights of Mayhem. They are a real full contact jousting team.

Shadow: What was the live jousting like? Were they armored?

TY: The live jousting was awesome. It’s full contact jousting, so they are fully armored as knights riding on horseback using 10 foot wooden polls to knock the other knight off. The group we saw was the Knights of Mayhem. They are a real group from Utah that still does this stuff. The jousting is done traditionally where the knights receive their lances then wait for commands to turn around their horse, then they charge the other rider.

Shadow: How do you know who wins?

TY: It is a point system. Two points for contact, three for broken lance, and five if you knock the other knight off of his horse.