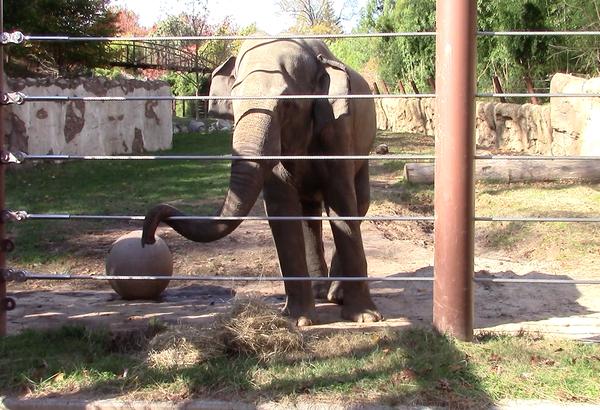 The Asian Elephant is one of the many endangered animals that inhabit the Smithsonian Zoological National Park. Three of the elephants have recently come in from Calgary Zoo in Calgary, Alberta.
Photo credit: Nikki Molina

Nikki Molina and Acel Soriano also contributed to this story. This story was awarded a “Superior” ranking for the Online News Package Writeoff Category at the 2014 NSPA/JEA Washington D.C. convention.

The park is currently in possession of seven Asian elephants, whose species is listed as endangered on the World Conservation Union of Nature’s (IUCN’s) Red List of Threatened Animals.

“It’s interesting to be able to learn about these types of animals. When I signed up to volunteer, they had us take a class and we learned a lot about Asian elephants. Our zoo has six females and one male [Asian elephants],” Elephant Trails Interpreter Karen Schwartz said.

With as many as 60 different endangered or threatened species in possession altogether, the zoo admitted the Asian elephants through the Association of Zoos and Aquariums (AZA) Species Survival Plan (SSP). 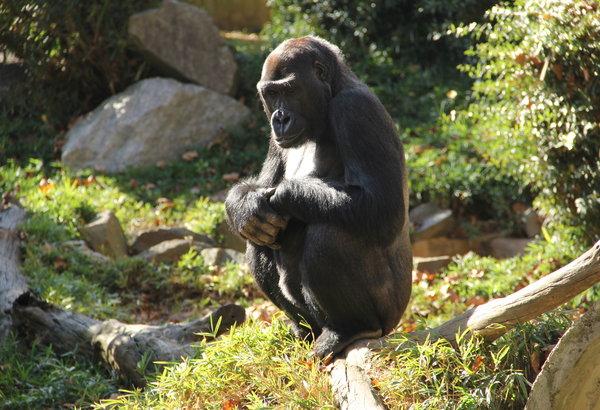 At the Gorilla exhibit, Mandara, a lowland gorilla sits on a branch while carefully examining park visitors. She is also called “Super Mom” for giving birth to six gorillas.
Photo Credit: Jenika Chiang 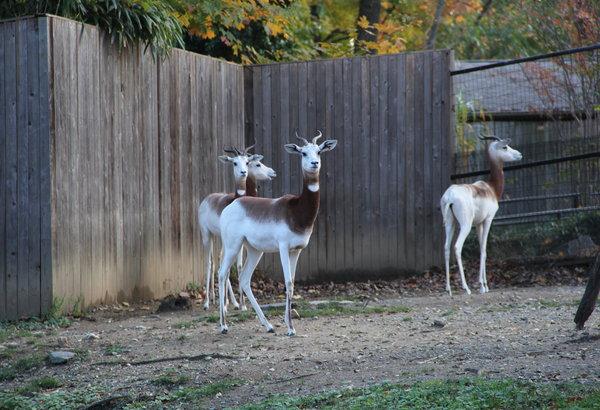 Dama Gazalles, also referred to as addra gazelles, are the largest and the rarest out of all the gazelles. This species was once ranged across northern Africa, but is now only found in isolated areas.
Photo Credit: Jenika Chiang 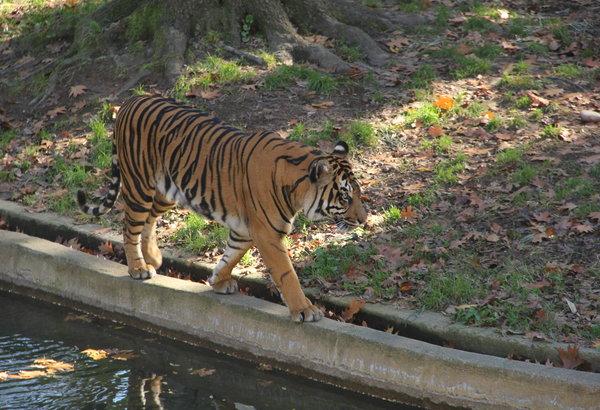 Bandar, a male Sumatran tiger, roams around the water before running off with another tiger named Sukacita. Out of the three island subspecies, only the Sumatran tigers remain and are being bred at the zoo.
Photo Credit: Jenika Chiang 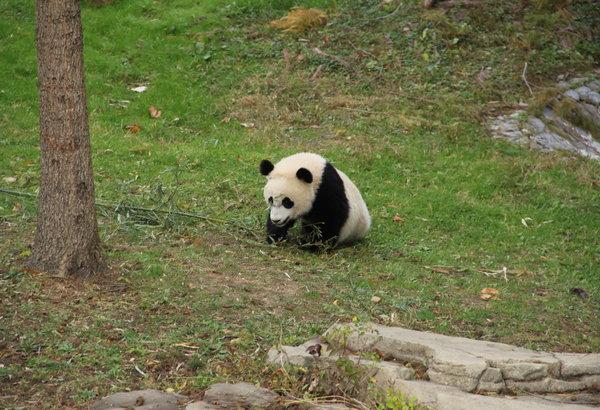 While roaming its exhibit, the giant panda bear takes a break to eat bamboo. The exhibit was designed to mimic the terrain in China, giving them a place to stay cool during summer and providing enclosed spaces for when they need privacy.
Photo Credit: Jenika Chiang 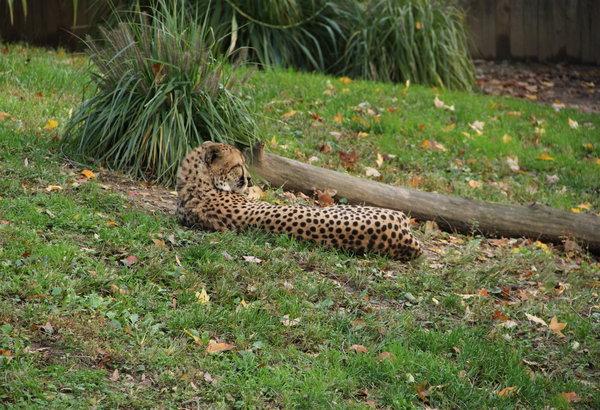 After a short walk, the cheetah lies down and warms itself with the daylight. Cheetahs are the world’s fastest land animal and are now listed as vulnerable on the World Conservation Union’s (ICUN’s) Red List of Threatened Animals.
Photo Credit: Jenika Chiang
“We do not bring elephants in from the wild. In some cases, they are from the wild but they’re not captured. If they’re from the wild, they just needed relocation,” Senior Elephant Zookeeper Debbie Flinkman said.

Each SSP program is managed by their corresponding AZA Taxon Advisory Group (TAG), which examines the conservation area to determine the needs of an entire taxa, or species. The TAG authorizes the keepers and staff at the Zoo to relocate the animals based on their species’ needs.

“It lets us move the animals around based on breeding needs so we can take those things in account,” Flinkman said.

In addition, the “Elephant Outpost” area was recently renovated to accommodate and harbor these endangered Asian elephants. Each elephant is fed 125 pounds of hay, 10 pounds of herbivore pellets, 10 pounds of fruits and vegetables and a few leafy branches every day at the zoo. 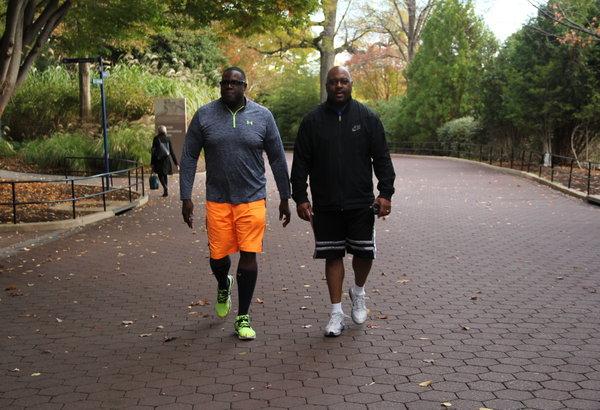 Locals James Brown and James Jenkins jog around the zoo to start their morning. The zoo does not officially open until 10 a.m., but the public is allowed to be on the ground area starting at 6 a.m. “This is the first time I’ve been here and it’s very pretty. The map looks nice and the gorilla and giant panda habitat look the most appealing to me,” Jenkins said.
Photo Credit: Jenika Chiang 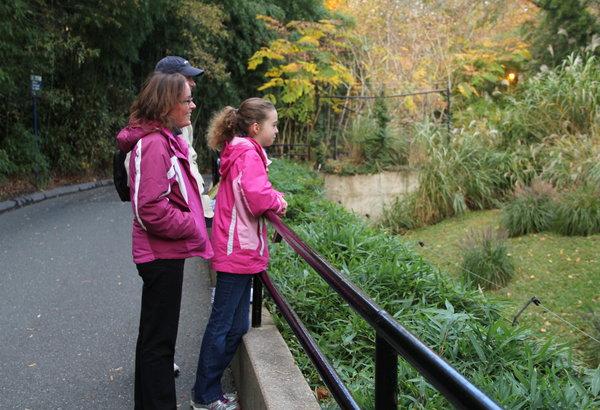 In order to beat the crowd, the Osborn family arrive at the zoo extra early to visit the exhibits. They visited the Cheetah Conservation Station first to be able to see the zebras and cheetahs in their natural state. "We wanted to see the pandas too, but we haven't seen them yet," Pam Osborn said.
Photo Credit: Jenika Chiang 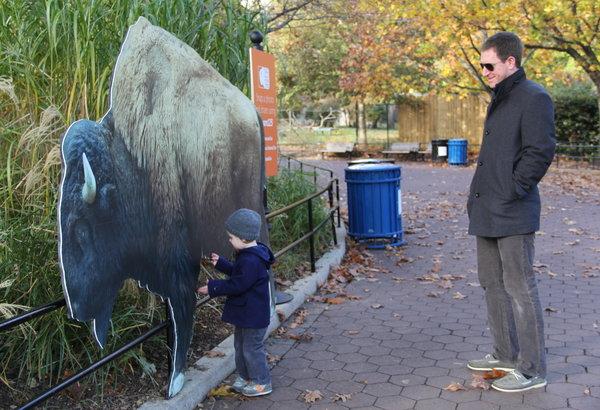 John and Flynn Hennessy visit the national zoo in search of bisons, cows and small mammals. They recently decided to become members of the zoo because they visit often. "I haven't seen a bison yet, but I think it's cool that the zoo has one because their area is cool," Hennessy said.
Photo Credit: Jenika Chiang
“I love learning and talking about the animals. It’s amazing to be able to talk to people about these amazing elephants,” Schwartz said.

The zoo’s only male Asian elephant, Shanthi, will turn 13 years old on Nov. 25. He is the only elephant that was born at the zoo.

“I’ve never been to this zoo before. It’s my first time here and I love seeing all these interesting animals,” Westchester, N.Y., local Naomi Esteves said.

In order to help save the Asian elephants, Friends of the National Zoo (FONZ) accepts money donations online. The establishment has successfully raised 48% of their $80 million goal at $38.5 million.

“It’s nice to see animals that you don’t really get to see every day. I’ve always wanted to see the panda because they’re very endangered and I want to help in some way,” Hyattsville, Md., local Herbert Estrada said.