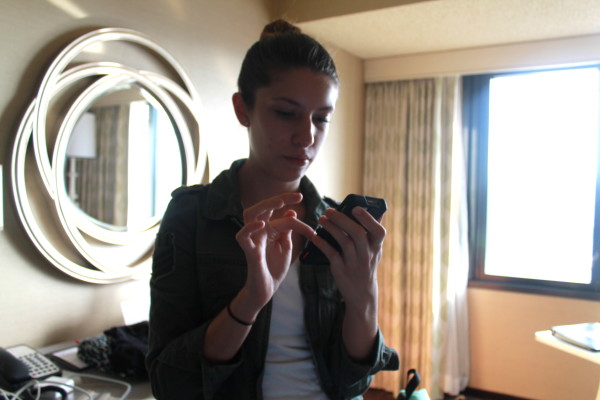 While sitting on the subway leaving the San Francisco International Airport, passengers are overwhelmed with the chaos until the stop at the Bay Area arrives. Leaving the subway, you will notice the crowds of people entering a large, elegantly designed hotel, the Marriott Marquis.

The lobby is a plethora of high school students and teachers attending the JEA/NSPA Spring National High School Journalism Convention. It’s rare to see someone here without a cell phone, iPad, or laptop. They take pictures, post on Instagram, tweet, or update their status a few times each hour.

“My journalism teacher is constantly updating his Twitter status about various workshops that we need to attend at the convention,” McKinney High School (TX) sophomore Julian Esparza said.

The theme that the JEA/NSPA is using this year is #hsjSF (high school journalism San Francisco). Students, advisors, and speakers are using the hashtag when referencing the convention and the workshops or write off contests they are participating in.

The Twitter account JEA/NSPA #hsjSF is posting all things relevant to the JEA/NSPA National High School Journalism Convention from Apr. 24-28. The account has 288 followers and has posted 60 tweets since the convention.

“I use Twitter more at the convention than I ever do at home. My adviser’s tweets and the #hsjSF tweets are being sent to my phone so I know where to go and what to do at all times,” Columbus North High School (IN) senior Lindsay Bare said.

The advantage of using social media and tech innovations are convenient for everyone to stay informed on Facebook, Instagram, or Twitter accounts; they can be easily accessed inside the hotel and while roaming the busy streets of San Francisco.

“The use of social media at the JEA/NSPA convention is phenomenal. Whether young or old, everyone is either staying informed or informing others of important details about the convention through a form of social media,” West Potomac High School (VA) Lily Weisblatt said.

The following story was produced during the 2013 JEA/NSPA Journalism Conference.