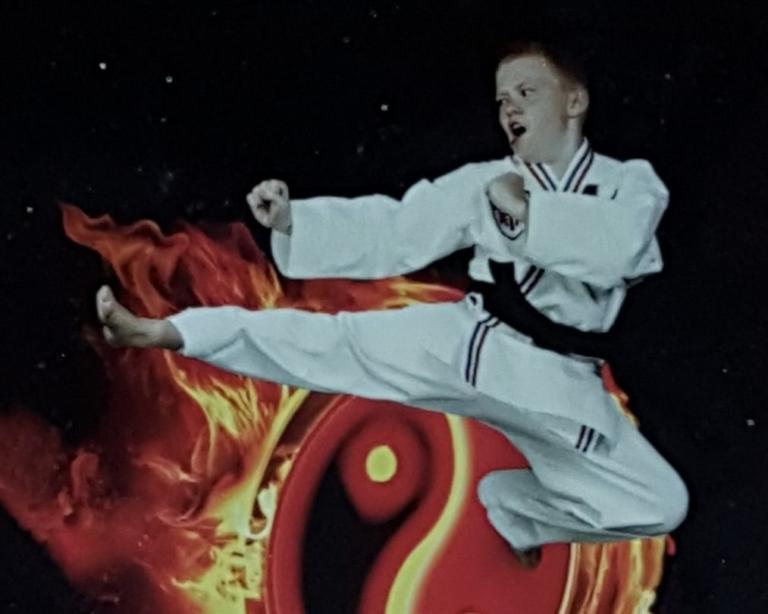 Doing a Jeet Kun Do, sophomore William Grube does a photoshoot for his dojo. He took the picture before his last competition. “I look back at it and I’m kind of happy I quit because now I have more time to do more activities I wanted to,” Grube said. Photo Credit: William Grube

While dozens of judges watch him enter the ring, sophomore William Grube faces his opponent Noah Ringer, the actor who played Aang in “The Last Airbender.” After a few quick jabs, Grube wins the first point, then a roundhouse kick hits him in the side of the head right after, causing him to swiftly fall behind 4-3 in a matter of a few rounds. After a head kick to Ringer, Grube gains two points. In 2016, Grube won that match in the Taekwondo Tournament of Champions in Arkansas, the highest tournament a martial artist can enter and placed 7th in the world.

“During that fight against Ringer, I just embodied Daniel from the ‘The Karate Kid,’” Grube said. “I put myself into the mindset and felt like I could take on the world from that point on. My winning kick was the crane, the same winning kick from the movie, so the mindset actually helped me win in a way.”

Grube competed in Nationals twice in Florida and California. He has also competed in numerous tournaments and competitions across the state, such as ATA District Championship.

“Sparring in the dojo gets boring after a while,” Grube said. “You learn everything about your peers so you know how they fight and what their next move will be. Competitions and tournaments allow you to fight someone new you don’t know so you never know what to expect–it’s a big adrenaline rush.”

At the age of seven, Grube began training in martial arts at Martin’s ATA Leadership Academy. Grube chose taekwondo because he refused to play a team sport. Taekwondo also appealed to him because he wanted to learn discipline, self-confidence and control.

“When he did taekwondo, [Grube] knew how to control himself in a calm, respectful way,” sister Carley Grube said. “He spent at least two hours at the dojo, almost every single day and you could really see how much it helped him.”

“When I reached a second degree black belt, I felt I needed to get the third degree black belt and I’d probably spend a decade working for it,” Grube said. “After that, I planned to compete in the Olympics in sparring. If I could rank 7th in the world at 14, I feel I could win gold, silver or bronze medals in the actual Olympics at 25. I wished I could make it to the Olympics, but I didn’t think I was dedicated enough to continue working for 10 whole years and I just didn’t have any time for that.”

During a tournament in Arizona, there was an issue with his weapon that didn’t allow him to compete. After this, Grube took some time to think if he wanted to continue and then realized he needed a break from the sport, so he quit.

“In the moment, I was fuming with anger,” Grube said. “I was told I could use the weapon, but then when I found out I couldn’t, I felt cheated and lied to. Maybe I was being dramatic at the time, but it was an important competition for me and I needed to compete. It ruined my day and my weekend, I had to go to the competition and watch everyone else compete.”

Since then, Grube decided to try robotics and coding, something he wanted to try for years but could not find the time due to taekwondo.

“I will forever appreciate the sport and I am grateful for all the opportunities taekwondo gave me in life,” Grube  said. “Now that I’ve quit, I can focus on robotics and coding, something I’ve been passionate about for years. If I can figure out a way to manage robotics and taekwondo, I will definitely consider returning to the sport, but right now I need to focus on one thing at a time.”