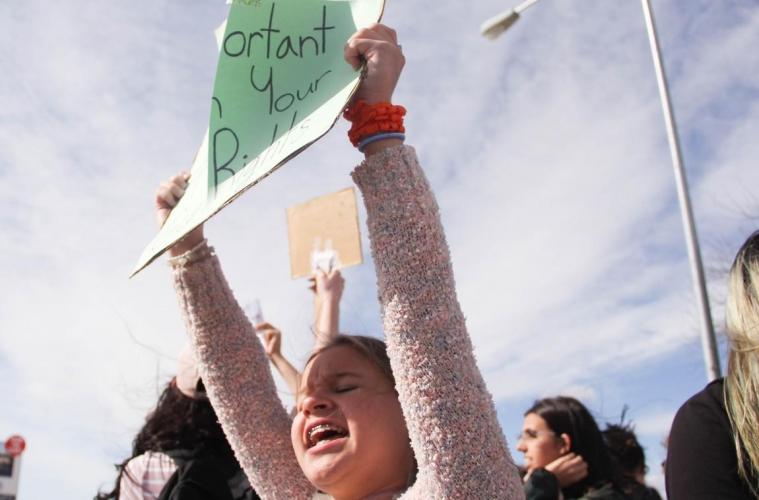 While holding her handmade sign, junior Kendra Salcedo chants the phrase “Never Again,” referencing to the lack of gun control laws in the country. Salcedo uses her strong voice and credible knowledge to speak out against discrimination. “I think I am a major influence on my friends because I constantly push them to be who they are and to fight for what they believe in,” Salcedo said. Photo Credit: Justine Ho

With a rush of adrenaline and clever advice, junior Kendra ‘Honey’ Salcedo speaks out against classmates who have demeaning opinions and intolerable behavior. Whether it involves race, religion or sexual orientation, Salcedo doesn’t let any derogatory sayings slide.

“I mainly speak out in front of people in class,” Salcedo said. “Even though talking about various controversial topics makes the room uncomfortable, I don’t mind speaking up. I just want to be able to find a way to make [the world] better for everyone. Throughout the years, I’ve been getting more confident with calling people out too.”

Salcedo takes pride in arguing over controversial topics. Even if her opponent makes good points or the argument dies down, she feels accomplished because her opinion was heard.

Additionally, while attending protests Salcedo ensures her voice continues being heard. In these events, Salcedo advocates for changes in favor of minority groups and dismantling unjust regulations. Since Salcedo is part of the LGBTQ+ community, her focus is usually within that demographic.

“I have attended two protests, one against Donald Trump and another to promote gun control laws,” Salcedo said. “I went to Trump’s protest because he has made multiple slurs and derogatory insults towards autistic people and women. It was amazing to see people coming together passionate about the same issues as me.”

During the previous walkout held on campus, Salcedo took the initiative to present a speech to her peers about gun control.

“My mom inspired me to write that speech, and as much as I love my parents, the issues of today don’t compare to theirs,” Salcedo said. “My mom and I had argued over if I should or not and after giving up, I sat down and wrote the speech down anyway. I know she didn’t want me to, but I absolutely needed to. Safety is more important than anyone’s right to own a gun.”

For Salcedo, fighting for equality is important—not only because she is personally affected by some issues, but also because she believes some minorities don’t speak up for themselves. With consistent confidence boosts from her parents, Salcedo believes she can accomplish any task.

“I think [Salecdo’s activism] is good because it matters for those that don’t know how to express themselves,” Salcedo’s father, Matthew Salcedo, said. “Expressing yourself is important, but I feel like kids these days don’t know how to communicate with people. So when she speaks out, she makes a good inspiration for other kids to communicate about what they think matters too. “

In the long run, Salcedo hopes to break gender stereotypes. By being confident in herself and keeping her aspirations unaffected by gender biases, Salcedo believes she will be able to influence others to end gender stereotypes too.

“An equal world is safe for everyone, regardless of who they are,” Salcedo said. “In this world, everyone doesn’t need the same rights but instead the same opportunity. Equality shouldn’t be a privilege by birth, it is a basic human right for all human beings. Therefore, in the future I plan to go to more protests for women, the LGBT community, environmental rights and gun control. My voice can add on with others, and together we can make an impact to change.”