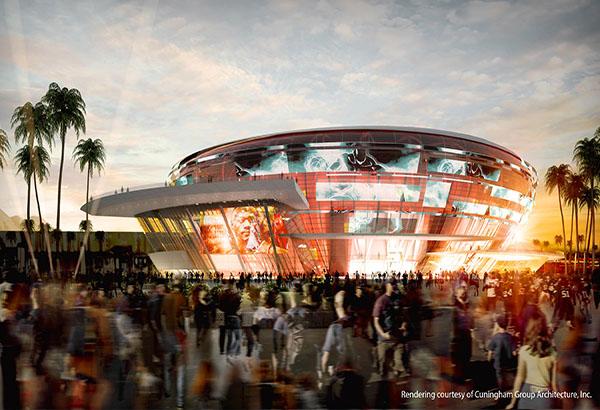 Las Vegas: a vibrant city filled with famous entertainment. Filled with shows like Cirque Du Soleil, malls such as Fashion Show, an amusement park in the Adventure Dome, and the largest ferris wheel in the world in the High Roller on the Strip, Vegas provides locals and tourists with many forms of leisure. Yet, unlike other major cities, Las Vegas is missing one thing: a major professional sports team.

Although the city does have success with minor league teams and college sports, the past is marred with failures in keeping franchises here. However, there is newfound hope as Las Vegas has the potential of receiving an expansion team for the National Hockey League (NHL).

“I’m hopeful because an NHL team in Las Vegas is the first step in making this city a sports city. Although I’m not an avid hockey fan, bringing it here will help the sports world see what a fantastic place Vegas really is for a sports franchise,” junior Leonardo Castro said.

The 51s, who play at Cashman Field, are a team that have been up and down, from winning more games than losing, to losing more than winning and have yet to bring a championship win to Vegas. They are the closest thing to a major team and are connected to the MLB, as the player development team of the New York Mets.

“Even with the 51s in Las Vegas, it still feels like there’s no sports going on in Las Vegas. What locals look forward to in Vegas is the UFC events, boxing matches and NBA games that come to the city. No one bats an eye at triple A baseball. I absolutely believe that we need a professional team in Las Vegas to get everyone interested in sports,” junior Carlos Leyva said.

The Las Vegas Outlaws, who play off the Strip at the Thomas and Mack Center, are an expansion team for the Arena Football League. They begin their inaugural season by having their home opener on March 30. Though it is not as gigantic as the National Football League (NFL), bringing the gridiron on a smaller scale increases residents exposure to sports.

“I think it’s pretty cool how we’re going to have an arena football team in Las Vegas again. I look forward to watching them play,” senior Roy Badillo said.

Other than minor league teams, Las Vegas hosts college sports and events, due in part from the UNLV Rebels. Residents can occupy themselves at sporting events with Rebel football in the fall, and Rebel basketball in the spring. Other than UNLV, Las Vegas hosts a multitude of events ranging from college basketball tournaments, to mega fights like Mayweather versus Pacquiao, the Ultimate Fighting Championship (UFC), the Las Vegas Bowl, NBA Summer League, USA Basketball and NASCAR.

“I’m really hyped for the Mayweather versus Pacquiao fight. I’ve been waiting for this fight to happen for five years now! It will totally help the sports scene in Las Vegas. In a way, people will be attracted with the sports world in Vegas just because the fight is happening here. The fight of the century will be seen by millions of people,” senior Bervin Catacutan said.

There have been numerous failures in keeping a franchise in Las Vegas and luring professional leagues to place a team here. For the MLB, Las Vegas was considered to be the relocation spot for the Montreal Expos, but instead, Washington, D.C. was chosen and are now the Washington Nationals. Las Vegas was also considered to house the relocation of the Seattle SuperSonics, but lost to Oklahoma City, due to the city being the new team owner’s hometown. They are now the Oklahoma City Thunder. Just recently, Las Vegas was taken out of the running for a Major League Soccer (MLS) expansion team in favor of Minneapolis, Minnesota, and will have to wait until after 2018 to be considered for a team again.

“I was angry when we lost our chance for an MLS team. I had so much negativity for that because I was ready for more of a soccer environment to sprout through this opportunity. This could have gotten more support for other athletic programs to come to Las Vegas and create a different atmosphere for athletes,” junior Izeah Guiao said.

What professional sports league should have a team play in Las Vegas? | Create infographics

One of the main obstacles that hinders the city’s chances is that Las Vegas is synonymous with gambling, especially since all four of America’s major professional sports leagues (NFL, NBA, MLB, NHL) have anti-gambling policies for its players. In addition, Las Vegas lacks the facilities, as the current stadiums and arenas do not have a large enough capacity or are too old to host a professional team.

“I think not having proper facilities hurts our chances. Most teams want to know what facility is going to be their “home.” Since Vegas doesn’t have many places for them, it’s hard to visualize what they’re getting into,” sophomore Zaina Khater said.

Other than luring leagues to place teams here, Las Vegas has failed to keep the current sports franchises in Vegas, as teams have either disbanded or relocated. Most recently the Las Vegas Wranglers hockey team becoming inoperative, due in part to not renewing a lease with the Orleans Arena and not being able to find a new arena afterwards.

“I think that the Wranglers no longer being here makes hockey less prevalent, but with the new NHL team possibly coming to Vegas, I believe we may never see the Wranglers again,” junior Nicholas Wortham said.

Hope for the future

The city can get excited again with the prospect of having a possible professional sports team. The NHL allowed potential team owner Bill Foley to run a ticket drive to gauge citizen interest in the Las Vegas area. The goal was to reach 10,000 season ticket holders, starting Feb. 10. Within 36 hours, reached half that goal at 5,000.

“The goal is to secure 10,000 season ticket deposits. This was a goal set by the Hockey Vision Las Vegas group (the ownership group working to bring NHL hockey to Las Vegas), in an effort to demonstrate to the NHL and the Las Vegas community that Las Vegas could support a professional hockey team,”  Senior Vice President of Marketing & Communications for Black Knight Financial Services (company owned by Foley), Michelle Kersch said.

As of March 15, Vegas had reached 9,000 season ticket holders, 1,000 short of the goal. All of these season tickets have been bought by the citizens, and not casinos.

“I’m overwhelmingly excited at the possibility of getting this NHL team. I’m already planning to buy season tickets. Seeing all of my favorite hockey stars like Quick and Price has always been one of my dreams and to see it come to fruition would mean the world to me,” junior Jonas Tambora said.

If Las Vegas does receive this team, the team already has a possible team name: the Las Vegas Black Knights, a tribute to the Army Academy at West Point. To help out this ticket drive, visit here.