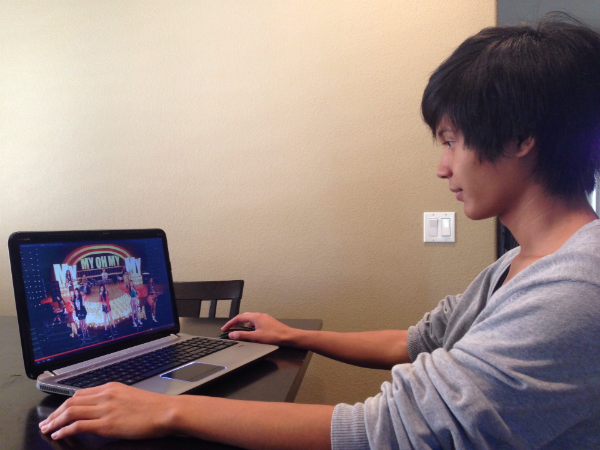 Sophomore Tyler Antonio watched a new music video by Girls' Generation. He has kept up with the latest need concerning Korean pop. "Since I consistently keep up with the K-pop industry, I immediately rushed to watch the new Girls' Generation song, 'My Oh My," and the teaser for Taeyang's album," Antonio said.
Photo credit: Aj Fletcher

If you see sophomore Tyler Antonio around the school, you wouldn’t expect him to be a dedicated fan of Korean pop. But as it turns out, he considers himself to be a true fan of the K-pop industry.

Southwest Shadow: What lured you into Korean pop?

Tyler Antonio: When I was first lured into K-pop, I actually knew about it for a couple of years, but I always thought it was odd. During that time, I had one or two favorite Korean songs, like Taeyang’s Wedding Dress, but for the most part, I didn’t like the genre. My friend really wanted me to get into it, so he introduced me to other songs from Big Bang and Taeyang. I used to think K-pop was all electronic, which I hated, but I found out there was a lot of amazing, lyrical and true music.

Shadow: How did you begin liking this type of music?

TA: I’ve always enjoyed the use of real instruments, like acoustic, in my favorite music, so to find songs like that in K-pop quickly appealed to me. It was kind of funny because my friend tried to keep me away from all the hardcore electronic K-pop songs and just more to the soulful idol groups.

Shadow: For how long have you been into this type of music?

TA: This is only the second year I’ve been into K-pop but I’ve already been caught up with the industry compared to people who have been listening to it for a long time. I’m also always keeping up with it on the Internet and on the phone.

Shadow: Does it take a lot of effort to keep up with the K-pop industry?

TA: Not really. I have apps on my phone that notifies me on almost everything in Korean media, which includes music, T.V. shows, and movies. Also, I’ve subscribed to a lot of my favorite artists on various websites so that helps too. Sometimes I just need to search an artist’s name and there will be an announcement on any upcoming plans for them.

Shadow: Who do you usually keep up with? Are there anyone specific or do you just keep up with everything in the Korean industry, in general?

TA: I acknowledge almost everything in the Korean media industry, but I direct most of my attention towards my favorite groups and soloists, which include all of their new music, dramas, T.V. appearances, or any other projects. Some of the artists I keep up with are Big Bang, Girls’ Generation, Beast, CN Blue, Epik High, Busker Busker, 10cm, Roy Kim, Lee Seung Chul, and Na Yoon Kwon. I also follow actors and actresses like Lee Min Ho and Jang Geun Suk.

Shadow: Do you have any favorite Korean artist? If so, who and why?

TA: My favorite Korean artist by far is Tablo, who is the leader of the underground hip-hop group Epik High. Since hip-hop was the first genre of music I liked, it was natural for me to get into his music, especially since he uses real instruments to produce beautiful melodies. I love his style of composing music with the piano, guitar and drums. But what Tablo is mainly known for are his lyrics. His words are so passionate and wise that there’s even a museum with an exhibit dedicated to just his lyrics.

Shadow: Concerning idol groups, who are your favorites?

TA: For idol groups, or K-pop groups, Big Bang is my favorite male band because they have a very unique and passionate, acoustic sound. Taeyang, who is part of Big Bang is a good example. Girls’ Generation is my favorite girl group. I actually don’t listen to a lot of female idols. The ones whom I do listen to are independent.

Shadow: How many songs do you have in your phone that are K-pop?

TA: In my [music] library, I have about 300 Korean songs. I also have a list of “To Be Downloaded Later” songs when I hear something I like but don’t have time to get to it. There’s about a hundred in it…

Shadow: What are the usual reactions when people see your music playlist?

TA: When  people find out I listen to K-pop, they always say something like, “Wow, I would never have guessed that you listen to K-pop!” I don’t really blame them because it’s true. Even I wouldn’t have guessed it if I were in their position. I just make sure to let them know because I don’t just listen to the idol, or “K-pop” groups. Even though I follow a lot of the idol groups, I think I keep up with more independent groups because I prefer their style of music. Even though I like K-pop, it was a little difficult to adjust to it at first because it’s a pop genre and I’ve always been into acoustic, rock and hip hop music.

Shadow: Is it hard for you to meet and encounter people who have the same interest in K-pop as you do in school?

TA: Yeah, it’s a little difficult to connect with others who have the same interests as me because most people don’t really talk about it or they might not even like, or have heard about, K-pop.

Shadow: What non-K-pop music are you into?

TA: Before I started listening to K-pop, I listened to underground and independent acoustic, rock, and hip hop. I also like Japanese rock. I still listen to those types of music but not as much as K-pop.

Shadow: Are you glad you discovered K-pop?

TA: I’m glad I was able to find Korean music because it has both fun and passionate music. It’s become a lifestyle for me. It also opened up the doors for other types of Korean media such as dramas and variety shows. I hope Korean music becomes more popular globally so other people can experience it too.