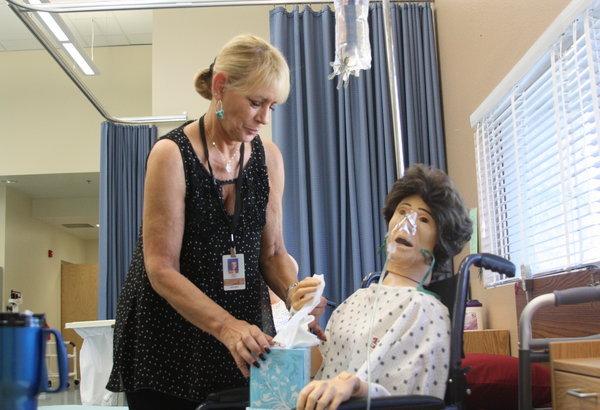 New Nursing instructor passes on her experiences as she teaches students. Dymon was a nurse for

A nurse is rushing through hospital halls to get to one of her patients, which she has done for almost 40 years. Working as both a licensed practical nurse (LPN) and a registered nurse (RN), she spent her years between hospitals, nursing homes and psychiatric wards.

“Her 40 years of experience is beneficial as it gives us the insight into what might happen on the job so we can prepare ourselves to handle issues when dealing with patients and staff,” senior Kathleen Jaictin said.

This nurse is Ms. Janas Dymon. Even though she was in the nursing profession for four decades, her teaching career has just entered its third year.

“I feel that it is refreshing to have Ms. Dymon as the new nursing teacher. Her class is enjoyable and will improve as the year progresses and she adjusts to the campus,” junior Carlo Miciano said.

Thanks to a little help from her daughter, Dymon unintentionally signed herself up for her new found passion.

“After being unemployed for nearly two years, my daughter basically tricked me into getting paperwork done to sign up as a teacher. When I was filling in the forms, I truly and honestly believed that my daughter brought me to get my passport done,” Dymon said.

After many years and memories created during her job as a nurse, Dymon now reminisces about her experiences with her nursing students, expanding their knowledge, while also sharing a part of her life.

“One of the stories I told my students was during my time in a nursing home. I went to say good night and check in on one of the residents, who sat me down next to her. She started talking about her growing up and brought up all the inventions and discoveries made in during lifetime. She said, ‘you know, I really have lived a long and good life. I’m really tired now.’ She closed her eyes and died, right on the spot,” Dymon said.

Included in her memories of being employed at various medical facilities, working in psychiatric wards was Dymon’s personal favorite. She forged deep connections and had empathy for those in the ward.

“When I had the opportunity to try different fields of nursing, I found that people in psychiatric units, nobody liked to take care of them because they acted bizarrely. I found them interesting, intriguing almost. I began to like it more and more,” Dymon said.

Her memories as a nurse may have never happened if she followed her goal of becoming a hairdresser. From a very young age, she was influenced to become a hair stylist, due to most of her family being in that line of work. Dymon’s mother, also a hairdresser, did not approve of that idea.

“I wanted to become a hairdresser, but my mother begged me not to become one. She said to be something important, so she told me to become a nurse, so I became a nurse, fulfilling my mother’s wish,” Dymon said.

Dymon, even with all the respect in the world for nurses and the medical branch, does not see herself returning to her previous job.

“I would not even think about returning to my previous job as a nurse, I enjoy teaching much more. If I knew back then what I know now, I definitely would have become a teacher long before,” Dymon said.