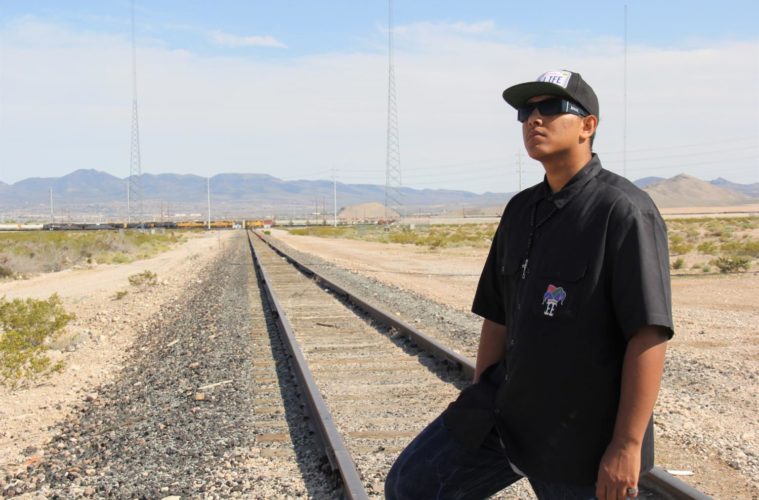 Posing on a railroad, junior Daniel Cabrera models for his clothing company Forever Foos. The company started last year with the help of his friends and family. “My whole life I've been into artwork,” Cabrera said. “Painting, coloring, drawing and creating–I’ve been there.” Photo Credit: Edgar Garcia

After a bright abstract painting catches his eye in the art gallery, junior Daniel Cabrera stops in his tracks and starts sketching his ideas in a notebook. He plans a meeting in his dining room with a room full of high school students later that afternoon and pitches his designs for a new collection for his clothing company, Forever Foos.

Inspired by fashion giants like Tommy Hilfiger, Cabrera started designing shirts–launched his own clothing company Forever Foos, last year. His love for fashion and business started at the age of nine.

“I was in fourth grade when I started drawing all over my shirts,” Cabrera said. “I was really into what I wore and made sure I was always clean and crisp. My peers started to notice and asked me to draw on their shirts, so I did.”

Since then, Cabrera’s interest in art and fashion grew. In middle school, his parents bought him his first Yudu machine for in-home screen printing and he taught himself business by watching Valuetainment videos on YouTube.

“I came here to [this school] and met some friends, and one of them promised me an investment of $5,000,” Cabrera said. “That’s what really got the ball moving.”

Although the investment wasn’t received before the company could officially launch, he borrowed $500 from his mom and paid her back in less than a month with the money he earned from his sales. Later, Cabrera formed a team that consisted of four other students to work for Forever Foos.

“Dani’s a good businessman,” junior Isaiah Bleifus said. “He knows how to run a company–he’s doing really well because he works hard and knows what kind of people he needs to hire.”

Forever Foos is currently working on a new limited-edition collection, which consists of Asian-inspired prints and calligraphy. Like the rest of the company’s clothing, this collection will also include their signature jester hat.

“It means being playful and foolish forever and never caring about anyone or a higher class,” Cabrera said. “That’s the purpose of the jester hat–the jester entertains the king.”

Now, Cabrera’s company is starting to sponsor shows featuring local artists and hoping to expand to cities like Los Angeles, California. His family and friends are helping the company grow by advertising and selling the clothes in their areas.

“The money Forever Foos produces gets invested right back into the company to keep t-shirts coming and things like that,” Cabrera said. “I don’t take money out from the brand for personal use either. But what I do give [my team] are gigs with other companies.”

Forever Foos clothing can be purchased on the company’s website or from any staff member. Shirts range from $20 to $25 while hoodies range from $35 to $45.

“I just want to be able to succeed in whatever I put my mind to, and if I don’t succeed I want to learn something,” Cabrera said. “I try to do things differently and show people all the ways of becoming a somebody in this world.”