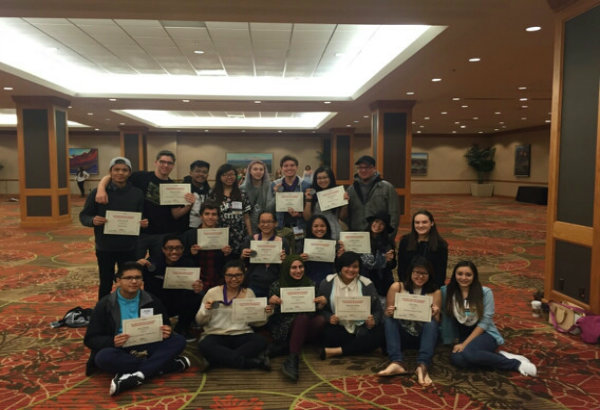 The Southwest journalism staff took home 14 awards at the JEA/NSPA convention. The convention was held on April 16-19 in Denver, Co. "It opened my eyes to how incredibly talented our journalism program is and makes me proud to say that I am apart of this group of individuals," junior Precious Galang said.
Photo Credit: Mrs. Laura Penrod

At the Journalism Education Association (JEA) and National Scholastic Press Association (NSPA) “Stories Elevated” convention in Denver, Colo., 14 of the 19 SWCTA students attending the convention placed in the JEA Write-offs and the Southwest Shadow was named 10th place for the Best in Show – Online Publication (Small School).

“News does so much work and covers many stories that occur inside and outside the school. They’re all talented writers and people and I’m so proud of them for winning 10th place. They really deserve it,” junior Tamara Navarro said.

Out of the 2,700 convention attendees, 988 of them competed in the write-off contests. 407 winners were announced at the awards ceremony on April 19 at the Sheraton Denver Downtown Hotel. From those winners, 62 were awarded with a “Superior” rating, 137 were presented with an “Excellent” rating and  208 were recognized with an “Honorable Mention.”

“My favorite part of the trip was on Friday during Trivia Night. We all thought it would be boring, but as the night went on we eventually had trouble breathing because of all the laughing, so the night was a great bonding experience,” junior Danijel Zekanovic said.

In addition, both staffs will be attending the JEA and NSPA “Media Magic” convention in Orlando, Flor. in the fall.

“I’m really excited with the opportunity of going to Orlando in the fall. It is going to be in Disney World, and I’ve always wanted to go there. In addition, going on journalism trips has been a great and enjoyable experience for me,” junior Migi Contreras said.