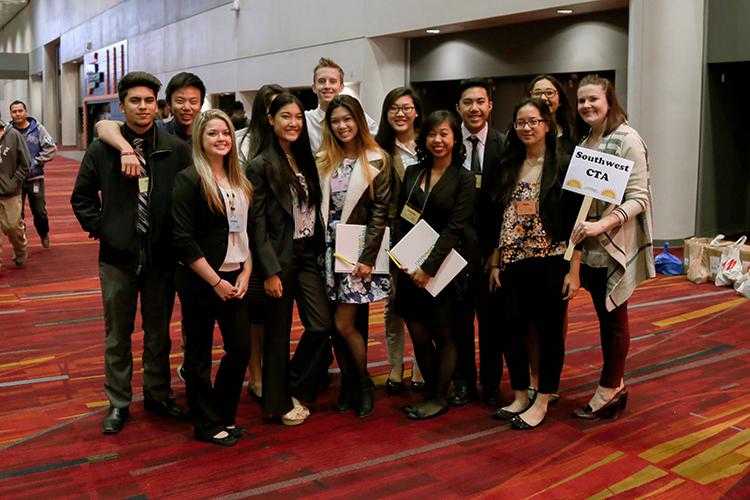 Supervised by Mrs. Miriya Julian, 16 elected students attended the 59th Las Vegas Sun Youth Forum on Nov. 24 at the Las Vegas Convention Center from 8 a.m. to 1:15 p.m. Two students were acknowledged for their academic performance during the trip.

“Attending the Youth Forum gives students an advantage because it lets them observe different opinions on different political topics and they’re forced to listen and consider other people’s opinions,” Julian said.

Students who attended the event were nominated by their class advisors. Each student was assigned a forum topic that ranged from America to Teen Topics to Potpourri.

“The conference was nothing like I expected it to be. This is the first Sun Youth Forum I’ve been to and I honestly didn’t think I’d have that much fun,” junior Victoria Truong said. “My experience changed my outlook on world views and what matters to me as a teenager.”

Topic discussions began at 8 a.m. and a moderator for each group supervised the students. By the conclusion of the conference, one student from each group was selected to represent their topic and appear on television, news, and radio.

“I thought it was cool to see how mature other people my age could be on important topics that concern school and the world. It was interesting to hear what others had to say,” senior Carlos Leyva said.

Senior Jonathon Walton was selected as the representative for his topic, America. In addition, senior Krystal Chaidez was selected to receive a $1,000 scholarship towards her college education.

“My topic was really competitive but I think I was chosen because I was very opinionated and my opinions resonated with everyone in the room,” Walton said.

In addition, Walton and Mrs. Julian will attend a luncheon on Dec. 8 at the Las Vegas Country Club.

“My experience was an enriching and life changing experience because I learned things about myself and life that I wouldn’t have known otherwise,” senior Aliyah Zolett said.