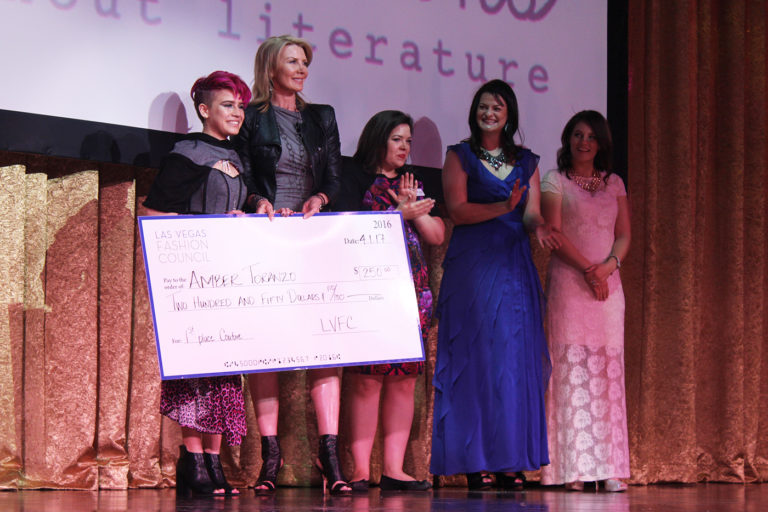 After winning first place in the Couture Level, junior Amber Toranzo accepts a check for $250. The Fashion Forward competition was started by the Junior League of Las Vegas nine years ago to allow Clark County students a chance to showcase their creativity. “[I thought] what if the White Witch was from the real world, so she probably would’ve been somewhat from the same time period that the story was written,” junior Amber Toranzo said. “She could have had her own journey, and her true character would be revealed thus the dark sorceress theme with some 1940’s elements in her look. At first it was a struggle to work with the fabric because it’s not my aesthetic, but I really tried to challenge myself by using most of it. I came to a realization that I could flip the fur over so it wouldn’t be overpowering and I could add more detail.” Photo Credit: Kiana Tibule

“Before Winter Break, participants were decided through an elimination challenge,” Fashion Design teacher Shannon Sheldon said. “It was about the second week back from Winter Break when students received their required materials and began working, so they’ve been working really diligently since then.”

Participants of the Couture Level were assigned a novel as inspiration, given a surprise box of fabric, and a gift card for $30 worth of lining and notions. Purchasing extra fabric was prohibited. Participants of the Designer Level were assigned a fairy tale as inspiration and were allowed to select their own fabric. A few of the fairy tales include Beauty and the Beast, Cinderella and Alice in Wonderland.

“A lot of class time has been devoted towards the outfits that the students have made for Fashion Forward,” Sheldon said. “At least twice a week, students have had the option of staying after school for an hour or so to work even more. Also, I’d let them come to school on Saturdays, and we became a close-knit group who would work on sewing for four hours.”

Designers had the option of modeling their own outfits or choosing someone else. Before the event started, students and models were given dressing rooms to prepare. There were also makeup artists to assist as needed.

“I was Rachel Merson’s model, so I would get fittings and come in after school whenever she needed me to, and she could make adjustments to the outfit,” junior Shelbi Watson. “I went to the rehearsal at the theater to practice walking, so I was comfortable on the day of.”

Winners of the Couture Level:

Best Use of Materials Given: Amber Toranzo (‘18)

Winners of the Designer Level:

“My first thought walking down the runway was terror, but once I started walking, I just soaked up the moment and enjoyed the experience because it was all of my hard work leading to that single moment; I wanted to enjoy it,” junior Grace Lange said. “It is definitely an experience that I’ll never forget.”

Out of the 68 students selected from 12 schools in Las Vegas, 20 of them were from SWCTA.

“I would say that the process leading up to Fashion Forward was a difficult one but totally worth it,” junior Jordin Valencia said. “As much as it was hard to not only create a design from scratch and, at times, create parts of the outfit without any factory pattern and instructions, it made completion of the final product more sweeter. Ultimately, [the project] led to a lot of growth and learning experiences. Plus, it gave insight on what the fashion world is like behind the scenes.”