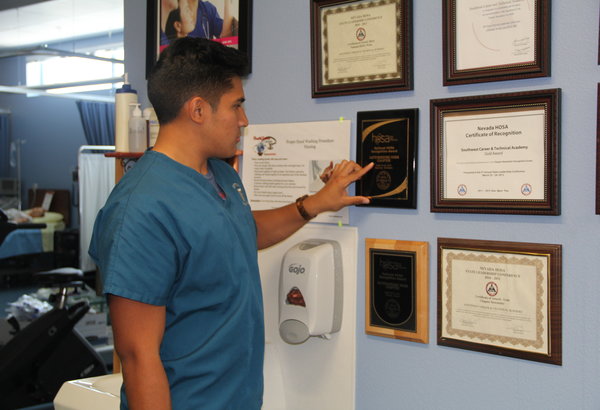 Newly elected Nevada Post Secondary President Andres Caja reviews the plaques that were awarded to the chapter. 36 members qualified for nationals in Anaheim, California, and the chapter received many recognitions. “I hope that I get to see all those who qualified for nationals in Anaheim, we need to support not only our chapter but also the state during the National Leadership Conference,” Caja said. Photo Credit: Helen Abraha

The annual HOSA Future Health Professionals State Leadership Competition was held at the Rio Hotel and Casino on Mar. 16-18, where 116 members attended the conference and participated in competitive events.

“We had an awesome presentation of students. We had about 77 students who qualified for the Barbara Jane Award, of which 20 or 30 students will be recognized at nationals for having over 50 hours,” HOSA adviser Mrs. Vicki Smith said.

A total of 60 participants placed either first, second, third, fourth or fifth in their respective categories, such as Biomedical Debate, Pathophysiology and Medical Spelling.

“This was my first time competing at state. I have to say it was really fun, even though I was nervous about how I would do in my competitive event. Overall, I am glad that I went, and I plan on going next year,” sophomore Ayyoob Hussein said.

Four students ran for state office during the state leadership conference, one of whom was elected for an office position.