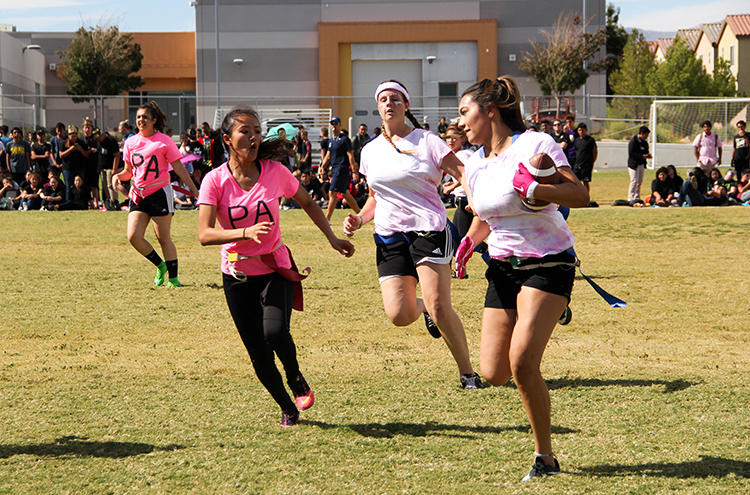 Only five minutes into the fifth annual homecoming game, freshman Paige Benak made a touchdown for the Professional Academy (PA) girls.

“My thoughts before the game was hoping that on the first play I wouldn’t throw an interception,” Benak said. “The game turned out the way we thought it would–as a team we worked hard and planned our plays.”

Additional touchdowns by freshman Ylla Aparece and junior Kelsey Rodriguez resulted in a win for the Professional Academy (PA) girls with a final score of 18-6.

“We did some fun plays and it was a successful game,” PA coach Robert Davis said. “[The game plan] each year is different so we [base it off] the athletes that come out to play. It’s not necessarily about improving but just building off what we have.”

The Design Academy (DA) boys led the scoreboard by 13-6.

“I believe our team did the best we could and I’m still proud of how we performed,” PA junior Trel Lakindanum said. “As a team, I still think that we need to work on being a whole. We had our moments for both offense and defense–but we all needed to keep the mindset of just doing our best to win.”

During halftime, the Coyote Cheer squad performed a dance routine.

“We had been practicing this routine from cheer camp,” junior Melissa Yelverton said. “As a team we worked hard to perfect this dance to showcase it during half-time.”

Homecoming week will conclude tomorrow night at Celebrity Cars Las Vegas Showroom. Tickets can still be bought at the door for $40.

“This is my favorite week, because it’s always fun to show spirit for my academy and play for them,” senior Mari Nishimura. “I’ve had a great experience for the past two years I’ve played, and I’m glad we won both years.”